Can Traditional-Rite Priests be Forced to Say the Novus Ordo Mass?

Q:  I am wondering if priests of Ecclesia Dei communities, such as the Institute of Christ the King Sovereign Priest, are subject to the diocesan bishop, specifically prohibitions against celebrating the Tridentine Mass… –Denise

A:  If you can’t figure out what Denise is talking about, don’t feel bad—because the wording of her question isn’t terribly precise.  She is referring specifically to religious institutes of priests who only celebrate the Traditional Latin Mass, like the Institute of 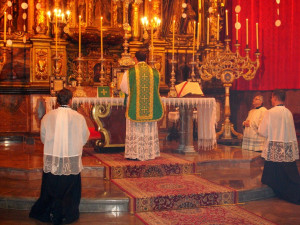 Christ the King (ICKSP) which she mentions, and the Priestly Fraternity of Saint Peter (FSSP), among others.  Many diocesan bishops throughout the world have invited priests from these institutes into their dioceses, normally to minister to the faithful in parishes, where they celebrate only the Latin Mass and administer the sacraments according to the 1962 Missal.

But thanks to the ambiguity of Traditionis custodes (Tc), Pope Francis’ recent motu proprio on the celebration of the Traditional Latin Mass, Catholics around the world are now understandably confused about whether Latin Masses can or cannot be permitted in parish churches (see “The Enormous Loophole in Traditionis Custodes for more on this).  And it’s not only the faithful who are confused—many Catholic bishops likewise seem quite unsure about what exactly it is they are supposed to do (or permitted to do) in this regard!  So what happens now to priests from these religious institutes, who have already been ministering to the faithful in parish churches, using only the old Latin rites?  Can a diocesan bishop force them to stop celebrating the Traditional Latin Mass, and say the Novus Ordo Mass in the vernacular instead?

While many, many aspects of Tc are vague, contradictory and unclear, the answer to this specific question is far less so.  At issue here are the parameters of the authority of a diocesan bishop vis-a-vis the religious institutes which operate in his diocese, and the constitutions of each individual religious institute.  And coincidentally, Pope Francis just recently issued yet another decree, which is directly relevant both to this general issue, and to Denise’s particular question.  Let’s take a look.

What Denise erroneously refers to as “Ecclesia Dei communities” are simply religious institutes like any other.  Both the ICKSP and the FSSP are Societies of Apostolic Life of pontifical right, like the Paulist Fathers, the Oratorians, or the Pallottines (c. 731; see “The Priesthood and the Vow of Poverty” for further discussion of what a Society of Apostolic Life is).  Whether their clerical members celebrate the Traditional Latin Mass or not, these religious institutes all fit into the hierarchical structure of the Catholic Church in fundamentally the same way.

As was described at length in “Notre Dame, Obama, and the Bishop’s Authority,” a religious institute can’t enter a diocese and establish a house and a ministry there unless the diocesan bishop grants them permission in advance (c. 609.1).  Either the bishop will invite a religious institute into his diocese for a particular purpose which is consistent with its charism (an institute of teaching sisters, for example, or one which ministers to the homeless); or the institute itself might ask the bishop for permission to erect a house there (perhaps property is for sale in X diocese, which would be ideal for an institute of priests to use as a seminary for its members). But in any case, the institute can’t simply waltz into a diocese and set up shop there without the bishop first giving them the okay.

Note that when a religious institute establishes itself in a given diocese, it does so for a particular purpose.  The bishop might have granted an institute of nursing sisters permission to come into his diocese and erect a hospital, for example.  If that’s the case, the sisters can’t later turn around and decide that they’re also going to establish a medical school there as well, unless the bishop first approves this change (c. 612).  Remember that the bishop originally allowed these sisters to come into his diocese to run a hospital, not a school—and so if the sisters want to expand their work into a different field in this diocese, the bishop will have to give his permission.

What if a diocesan bishop previously permitted a religious institute to come into his diocese in order to do X … but now he wants them to do Y instead?  The precise answer to this question (which is actually what Denise seems to be asking) is, “it depends.”  Let’s say that a bishop invited the Franciscans to come into his diocese, in order to staff the parish of St. Rita’s.  After doing so for years, the bishop would now like to move the Franciscan fathers from St. Rita’s parish over to St. Jerome’s, which is much bigger.  The nature of their ministry within the diocese would be identical—it would just be at a different parish. Assuming that the Franciscans’ provincial superiors were amenable to this, there’s no particular legal reason why the diocese and the Franciscan Order couldn’t sit down together and negotiate a new agreement, and move those Franciscan priests from St. Rita’s to St. Jerome’s.  Canonically, it could be done (and sometimes it is).

But let’s now imagine a different scenario.  Imagine that a contemplative order of nuns (see “What’s the Difference Between Sisters and Nuns?” for a discussion of the precise definition of this term) was permitted to enter Diocese X and build a monastery.  There the nuns pray and live a life apart from the world.  Now let’s pretend that the Bishop of Diocese X wants to erect a new Catholic medical clinic in his territory, and needs sisters to help to staff it.  He cannot oblige the contemplative nuns to become nurses or other medical workers at his new clinic, no matter how desperate he is for helpers!  Canon 611 n. 1 tells us that when a bishop permits a religious institute to enter the diocese and erect a house, the members have the right to lead a life there in accord with the character and proper purposes of the institute; and n. 2 adds that they also have the right to exercise the works proper to the institute according to the norm of law.  Thus the Bishop of Diocese X has no authority to change their raison d’être, which in this case is prayer and contemplation.  Nor could he unilaterally decide to alter the reason why they entered the diocese in the first place, which was to live in a cloistered monastery.

Let’s take another look at canon 609.1, which tells us that houses of a religious institute are erected by the authority competent according to the constitutions, with the previous written consent of the diocesan bishop (emphasis added).  Every religious institute has its own constitutions, approved by competent authority—and in the case of religious institutes of pontifical right, like the FSSP and the ICKSP, that “competent authority” is the Vatican itself.  (See “Canon Law and a Convent of Rebellious Sisters” for more on what the term “pontifical right” means.)  Institutes of pontifical right are directly under the authority of the Holy See, not of the bishop of a diocese where their members may be located (see c. 593).

So how does all of this apply to Denise’s question?  If a religious institute has been invited into a diocese and is engaging in its apostolate there, the bishop has no authority to demand that the members of that institute do something which is contrary to the institute’s constitutions, or is contrary to the work which the institute had originally entered the diocese to do.  In this case, the FSSP, the ICKSP, and a few other institutes around the world as well, all exist to provide Mass and the sacraments to the faithful using the old Latin rites.  The wording of their constitutions specifies that this is their raison d’être; and this is the reason why they were invited/permitted to establish themselves in a diocese in the first place.  (Here, for example, are excerpts from the constitutions of the FSSP—see particularly section c-8.)  Thus a diocesan bishop cannot unilaterally declare that henceforth, the clergy of these institutes can no longer say the Traditional Latin Mass (or hear confessions, etc.) using the Missal which is specified in their constitutions—which is usually the Roman Missal of 1962.  Put differently, a diocesan bishop cannot demand that a member of a religious institute violate its own constitutions!

Thus it is impossible for a diocesan bishop to insist that priests, who belong to a religious institute whose members only say the Tridentine Mass, must say the Novus Ordo Mass instead.  He might as well try to force missionary sisters to enter a cloister, or teaching brothers to minister in a parish!  Canonically, this simply cannot be done.

This is why it is no surprise that recently, when Pope Francis met with superiors from the FSSP, he personally reiterated that they retain the right to celebrate using the 1962 Missal.  As this Catholic outlet accurately put it,

In the course of the audience, the Pope made it clear that institutes such as the Fraternity of St. Peter are not affected by the general provisions of the Motu Proprio Traditionis Custodes, since the use of the ancient liturgical books was at the origin of their existence and is provided for in their constitutions.

Subsequently, Pope Francis put this in writing for them.  The wording of his decree is completely consistent with canon law, as explained above.  FSSP priests can “celebrate the sacrifice of the Mass, and to carry out the sacraments and other sacred rites, as well as to fulfill the Divine Office, according to the typical editions of the liturgical books, namely the Missal, the Ritual, the Pontifical and the Roman Breviary, in force in the year 1962.”  They do this in their own houses/churches (which by definition are all located in one diocese or another); and in other places by consent of the diocesan bishop—who invited them into his diocese to do this in the first place.  In other words, if for some reason the diocesan bishop doesn’t want the members of the FSSP who are in already his diocese to engage in their apostolate … his only option would logically be to find a justifable reason to compel them to leave.  This would constitute a complicated and arduous process, both legally and physically—and would most likely create an uproar among the faithful of the diocese as well.

While this particular decree was written specifically for the FSSP, the fact remains that canon law does not permit otherwise.  Thus it may serve as a guide for other religious institutes in a parallel situation.

Now Denise has the answer to her question.  Diocesan bishops cannot cite Tc, and try to force priests from religious institutes which only celebrate the Traditional Latin Mass to say the Novus Ordo Mass instead.  Religious are bound to follow the constitutions of their institutes, and not even a diocesan bishop has the power to compel them to do otherwise.