Can We Receive Holy Communion Twice on Christmas Day? (Repost)

Dear Readers, the era of rampant virus-hysteria and wholesale violation of the rights of the faithful to Mass and the sacraments has not ended!  This year, Catholics in some parts of the world (see this article about Berlin, Germany, for example) will be unable to attend Mass and receive the Eucharist on Christmas Day or any other day, because they refuse to be vaccinated.  If you’re able to attend Mass freely for Christmas this year, perhaps you could consider attending a second Mass and receiving Our Lord again–for the intention of one of those Catholics elsewhere in the world who tragically are unable to get to church at all?

Q: When we were kids, we were told that on Christmas Day, we were allowed to receive Holy Communion twice, if we attended two Masses.  The same was true for Easter.  Is this still allowed?  –Margie

A: As was discussed back in “Are Women Required to Cover their Heads in Church?” the current Code of Canon Law was promulgated by Pope John Paul II in 1983. It replaced the previous code of 1917. We don’t know how old Margie is, so it’s unclear which code was in force back “when we were kids.” But let’s presume that she is speaking about a time before the current code came into force. In this way we can see what the law used to say, and what it says today.

The 1917 Code of Canon Law stated quite clearly that it was not licit for anybody to receive the Eucharist for a second time in one day (c. 857). There were, however, two exceptions. Firstly, a person who was in danger of death could receive Holy Communion as Viaticum (c. 858.1). In other words, when a dying Catholic received the sacrament of Extreme Unction (often referred to colloquially as the Last Rites), the priest also usually gave the person Holy Communion for one last time. If the person had attended Mass earlier that day and received the Eucharist, and later his health took a turn for the worse or he was mortally injured in an accident, he could thus receive the Eucharist for a second time that day. Obviously this was an extraordinary situation that did not happen on a regular basis.

The second exception (also referenced in the former c. 858.1) occurred when it was necessary for someone to consume the Eucharist to avoid irreverence. If, for example, a priest who had already celebrated Mass were later to drop a Host on the church floor, the proper thing to do was (and still is) to pick it up reverently and consume it himself. He could do this even though he had already received the Eucharist at the Mass he had celebrated earlier the same day. Again, this was not an everyday occurrence.

The Vatican later permitted some additional exceptions to the rule. In 1973, the Congregation for the Discipline of the Sacraments (which was later renamed the Congregation for Divine Worship and the Discipline of the Sacraments) issued an instruction called Immensae caritatis, which stated that a Catholic could receive the Eucharist for a second time in one day if (1) he had received it first in a Mass on a Saturday morning, and then attended a Sunday vigil Mass that same evening; (2) he had received it at the Holy Saturday evening Mass—which in past years used to extend beyond midnight into the early hours of Easter Sunday—and then attended another Easter Mass on Sunday morning; (3) he had received the Eucharist at Christmas midnight Mass, and then attended another Christmas Mass later in the day; (4) he received it on Holy Thursday at the morning Chrism Mass, and then attended the Mass of the Lord’s Supper on Holy Thursday evening. 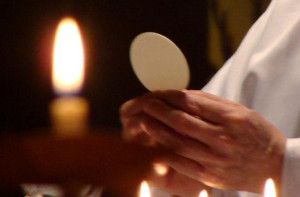 The instruction also admitted the possibility of other, comparable situations in which Holy Communion might be received for a second time in the same day, if a Catholic were to attend a second Mass. If, for example, someone were to attend a daily morning Mass, and later that day went to a funeral or a wedding Mass, he might receive the Eucharist licitly at both Masses.  But note that in each of these cases, the Eucharist had to be received during the course of a Mass. Furthermore, the two Masses were celebrated for different purposes. In other words, there was no provision in the document for receiving Holy Communion a second time outside of a Mass, nor was it permitted to receive it twice if attending, say, two Sunday morning Masses or two daily Masses, both celebrated for the same purpose. In fact, the Congregation specifically noted that the faithful were not to receive the Eucharist twice in the same day if these special circumstances were absent—for the general restrictions found in canon 857 were still in force.

After this instruction was issued, it was thus entirely permissible for a Catholic to receive Holy Communion twice on Christmas and on Easter, as Margie says, assuming that the first Mass was the Christmas midnight Mass, or the Holy Saturday vigil Mass. But with the promulgation of the 1983 Code of Canon Law, the rule was broadened even further.

The old canon 857 of the 1917 code was reworked and became the current canon 917. It states that a Catholic who has received Holy Communion once, may receive it again on the same day. The only restriction is that the reception must take place within the course of a Mass in which the person is participating. The usual exception for persons who are dying, of course, remains in force (c. 921).

What does all this mean? As it stands today, the law allows us to receive Holy Communion a second time on any day, provided that we receive it during a Mass. It does not have to be Christmas, or Easter, or the day of a wedding or funeral.

In 1984, a question on the correct interpretation of this canon was posed to the Pontifical Council for the Interpretation of Legislative Texts. As we saw in “Do Lapsed Catholics Marry Validly Outside the Church?” this Vatican entity alone can provide authentic—that is, official and binding—clarifications as to the meaning of the code. The question was asked whether the provisions found in canon 917 meant that a Catholic could receive Holy Communion only twice in one day, or could receive it however many times that he attended Mass. Could a person who attended, say, four Masses in a single day receive the Eucharist four times?

The answer was succinct, as usual. The Council simply said in Latin, “affirmative to the first part; negative to the second.” In other words, one may receive the Eucharist a second time in one day, if attending a second Mass; but no more. The “danger of death” exception, of course, always remains in force—so theoretically, if a Catholic received Holy Communion at two Masses in one day, and later were to receive the sacraments of the dying, he could receive the Eucharist yet again. Obviously, however, this would be a highly unusual situation.

The answer to Margie’s question should by now be clear. Not only is it permissible to receive Holy Communion twice at two different Masses on Christmas Day, it is actually allowed now on every day of the year.