Should We Baptize Aborted Babies, If Possible?

Q: Should hospital staff be baptizing aborted fetuses, if they have the chance?

I realize that Catholic doctors and nurses can’t participate in performing abortions, but sometimes they work in hospitals where abortions are performed by others.  If they have access to the body of an aborted baby, should they quietly baptize him/her? –Christine

A:  The short answer to Christine’s question is, “No, except in rare situations.”  There’s a theological reason for this, which we’ll get to shortly.  But first, let’s briefly review what has been discussed here before with regard to the sacrament of baptism.

We saw in “Inclusive Language and Baptismal Validity,” that baptism, which the Church teaches is necessary for salvation, is frequently referred to as the “gateway to the sacraments,” because only a baptized person can validly receive any of the other six sacraments (CCC 1213; c. 849). Because of its pivotal importance, it is the one sacrament that is easiest to administer validly.

In fact, baptism is the only sacrament that can be conferred validly not only by a layman, but even by a non-Christian!  Canon 861, which notes that the ordinary minister of the sacrament of baptism is a bishop, priest or deacon, adds that in case of necessity, any person who has the right intention may baptize.  To cite a common example (which is also relevant to Christine’s question), doctors and nurses—whether Catholic or not—have been known to baptize many, many infants and adults in emergency medical situations.  And the Church recognizes the validity of these emergency baptisms, performed without any of the external church rituals normally present at a Catholic baptism.

Given the importance of the sacrament of baptism, it isn’t at all surprising to find that canon 867.1 states that outside of emergency situations, parents are obliged to see that their infants are baptized within the first few weeks after birth. The very next paragraph, canon 867.2, adds that if the child is in danger of death, he is to be baptized immediately.  (See “How Soon Should a Baby be Baptized?” and “Can a Baby be Baptized Against the Parents’ Wishes?” for more on this.)

This logically brings us to the issue of aborted children.  The scenario raised in Christine’s question is addressed directly in canon 871, which tells us that if aborted fetuses are alive, they are to be baptized insofar as possible.  This is a fairly short statement, but its careful wording is firmly grounded in the Church’s theological understanding of the sacrament of baptism, and warrants a closer look.

First of all, aborted children should be baptized if they are alive.  That’s because the Church’s sacraments are for the living, not the dead.  The different purposes of the seven Catholic sacraments, and the different graces conferred by them, are intended for persons who are still here on earth, heading (we hope!) toward our home in Heaven.  Once we have left this world, bestowal of those sacramental graces cannot benefit us any longer.  This is, by the way, the same reason why Catholic priests do not administer the sacrament of the anointing of the sick to a person who clearly has already died.

Secondly, baptism is to be conferred on babies who have survived abortion if possible.  Since one reasonably presumes that practicing Catholics don’t work in clinics which 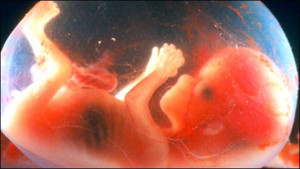 specialize exclusively in abortions, the odds that any of us might have access to a baby there who has managed to stay alive through the abortion process are slim to none.  But in quite a few parts of the world, Catholic medical professionals may very well be working in hospitals where abortions are performed, even though they themselves take no part in them.  Depending on the circumstances, it certainly can happen that, say, a Catholic member of the hospital staff somehow has access to a child who has at least temporarily survived a botched abortion, in which case baptizing the child would be in full accord with Catholic sacramental theology and canon 871.

This situation is known to have occurred about ten years ago here in Italy, in the southern town of Rossano.  An abortion had been performed in a state-run hospital there; and the next day, the Catholic hospital chaplain came to pray over the baby’s body—only to discover that the baby was alive!  (Note for the record that even public hospitals in Italy, which still pretends to be a Catholic country, routinely have Catholic priests serving as chaplains.  This explains the priest’s presence in a hospital where abortions are regularly done.)  This is precisely the sort of scenario where canon 871 would apply; and although no details are publicly known, it seems safe to assume that the priest did manage to perform a hasty baptism before the child died the following day.

If a baby is dead—which of course is normally the case after an abortion—he cannot validly be baptized.  But if a Catholic were to encounter the dead body of such a child, it would certainly be theologically appropriate to pause and pray, entrusting the baby’s soul to the merciful Hands of God and perhaps praying also for his parents.  That is no doubt what the priest in the Rossano hospital was originally intending to do when he arrived on the scene.

What if it’s possible that the baby is still alive, but it’s genuinely hard to tell?  If there really is a chance that the child has survived, it makes sense to try to baptize him before he dies, if the opportunity presents itself.  This is true not only of aborted babies, but of all children whose mothers are rushed to the hospital and give birth prematurely to a child who may or may not be stillborn.  Depending of course on the situation, the possibility might exist that the baby is still living (at least for a brief while), in which case baptizing him would be theologically appropriate if it can be done.

Since so many abortions involve ripping children to pieces before extracting them from their mothers’ wombs, however, there’s little reason to wonder whether a baby who has gone through this horrific procedure has died or not.  Thus baptism would be a non-issue in such circumstances.

Occasionally one hears nightmarish-but-true stories of pro-lifers who have found baby’s bodies, or body parts, that had been tossed into dumpsters outside of abortion clinics.  Since these are the bodies of human beings, made in the image and likeness of God and thus endowed with an innate dignity, they merit a respectable burial—and often a priest or non-Catholic minister is asked to perform a little funeral before they are properly buried in a suitable place.  But it’s worth pointing out that this is a separate matter from administering baptism.

Canon 849 tells us that baptism is necessary for salvation—but what happens to the souls of aborted babies, who died without baptism?  God alone knows for sure.  Since He loves these children with an infinite love, and since it’s hardly their fault that their lives were abruptly ended before they could be baptized, we can piously hope that God has arranged a special place for them which reflects this.  Sacraments are for the living, which is just one more reason why we Catholics pray that expectant mothers will always choose life.