(This was written some time ago, but since it has become incredibly popular during the Lenten season, it seems worthwhile to bring it to readers’ attention once again.  Note that declarations of a “pandemic” do not eliminate the clergy’s responsibility to make the sacraments of Penance and the Holy Eucharist available to the faithful, insofar as they are physically able to do so.  A blessed Easter to all!)

Q: When I was a kid, everyone was required during Lent to make his “Easter Duty.” Every parishioner received a card from the parish. When we went to confession before Easter, we handed the card to the priest. By Easter he had a huge stack of cards, showing which parishioners had made their Easter Duty and who hadn’t. But nowadays, people hardly ever go to confession like they used to, and nobody ever talks about Easter Duty. Has this requirement been abolished like so many other things? –Janet

A:  As has been seen so many times before in this space, canon law is grounded in theology. The most fundamental theological teaching about the sacrament of penance—that reception of the sacrament is necessary when we are conscious of having committed grave sin (c. 988.1)—will never change, because as Catholics we believe that this sacrament was instituted for this very purpose by Christ Himself. What can change over time, however, are the disciplinary practices (what one might call “housekeeping details”) pertaining to this sacrament, like that described in Janet’s question. Let’s take a look at what the current law says about confessing one’s sins at Easter time, and compare it to church law in the past.

Most American Catholics are at home with the traditional notion that while we should go to confession throughout the year, it is particularly necessary at Christmas and Easter time. In fact, however, there is no legal requirement to receive the sacrament at these particular times. Canon 989 states merely that everyone who has reached the age of discretion is required to confess his grave sins at least once a year. On the surface, it’s a very simple, straightforward canon, but let’s unpack it to be sure we understand exactly what is required of us.

The mention of the “age of discretion” refers to the fact that children who are too young to have made their First Confession are of course exempt from this obligation. The implication, therefore, is that once a child has reached the age of reason and has received the sacrament of penance for the first time, this annual requirement applies.

The canon notes specifically that a Catholic is required to confess his grave (i.e., mortal) sins. Thus if he is not conscious of having committed any such sins, there is no requirement to receive the sacrament. The preceding canon does note that it is recommended that the faithful also confess their venial sins (c. 988.2); but a recommendation is not an obligation.

Therefore, technically speaking, a person who does not commit any mortal sins throughout his life is not required to go to confession at any time, including the Easter season. Obviously canon 989 does not contain any particularly stringent requirements, and to many Catholics may actually seem quite lax! Was the law more demanding in the past?

Not at all. As was discussed in greater detail back in “Are Women Required to Cover Their Heads in Church?” the current Code of Canon Law was promulgated in 1983 by Pope John Paul II, replacing the previous code of 1917. Our current canon 989 is virtually identical to the 1917 code’s canon 906. That canon, in turn, was based on the discipline decreed by the Church during the Council of Trent (1545-1563), formulated in response to protestant claims that sacramental confession of one’s sins to a priest was not of divine origin and was unnecessary. We can see that with regard to a Catholic’s obligation to confess his sins annually, nothing whatsoever has been changed for nearly 500 years!

It is important to keep in mind here that the code is mandating the absolute minimum that is acceptable for a practicing Catholic. If one adheres to the minimum requirements, he is not violating the law—but that does not necessarily mean that doing only the bare minimum is a good idea.

Nor is it a good idea to fall into the trap of thinking that it is not worthwhile to confess sins that are “just” venial. Pope John Paul, in his 1984 Apostolic Exhortation Reconciliation and Penance, noted that venial sin “must never be underestimated, as though it were automatically something that can be ignored or regarded as ‘a sin of little importance’” (17). It is well known that the late pontiff himself confessed his sins every single day—and one might reasonably assume that they were venial, rather than mortal sins!

So what was happening in Janet’s parish when she was a kid? The practice she describes, 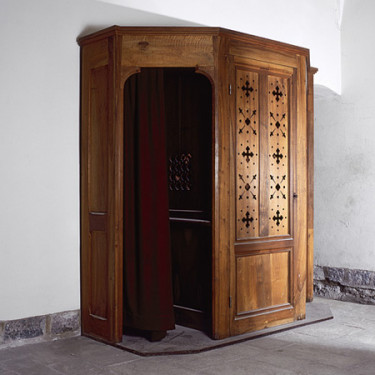 which was not unique, was one means that parish pastors sometimes used in the past to try to ensure that none of their parishioners received Holy Communion at Easter time in a state of mortal sin.

For while the code does not mandate that we Catholics must receive the sacrament of penance at any particular time of year, it does specify that we receive Holy Communion during the Easter season. Canon 920 notes that once a Catholic has received his First Holy Communion, he is obliged to receive this sacrament at least once a year, during paschal time (i.e., between Easter and Pentecost). This, and not a perceived requirement to go to confession, is the actual origin of the term “Easter Duty.”

But it does tie in directly with a requirement to receive the sacrament of penance first, if one has committed mortal sin. Canon 916 simply restates Catholic sacramental theology when it asserts that anyone who is conscious of grave sin may not receive the Eucharist without first having gone to confession.

Consequently, a pastor like Janet’s might reasonably have expected that at Easter, Holy Communion would be received by everyone in his parish—including some who ordinarily might not receive the sacrament, for a variety of reasons. Perhaps there were some parishioners who the pastor knew well were not regularly practicing their faith, or who might even be living scandalously sinful lives. If such people were to approach a priest distributing Holy Communion at Easter Sunday Mass, he might logically be concerned that they could still be in a state of grave sin. In order to obviate this problem, the pastor apparently established a system to determine whether in fact each parishioner had received the sacrament of penance before Easter. If he knew that everybody had done so, he might rest easier about giving them all the Eucharist. It was not a fool-proof system, of course, but it was a logical and sincere attempt to ensure that nobody was making a sacrilegious Communion in the parish.

A couple of significant problems with this approach are perhaps the reasons why it is not a current, widespread practice. Firstly, the system presumes that every parishioner will go to confession in his own parish. But there is no obligation to receive the sacrament of penance in a particular church or from a particular priest. Canon 991 states clearly that every Catholic is free to confess his sins to a confessor of his own choice, even to one of another rite. Lest anyone wonder whether this is an innovation in the 1983 code, the corresponding canon in the 1917 code was, once again, virtually identical. This means that anyone may lawfully go to confession in any Catholic parish; and this holds true even if, for example, the Catholic is a member of the Latin rite and he wishes to go to confession at a Byzantine-rite Catholic parish. (The different rites within the universal Catholic Church were discussed in more detail in “Are They Really Catholic? Part I.”) So if Janet’s pastor did not receive a card from one of his parishioners, it was always possible that the person had gone to confession somewhere else. The pastor could not necessarily make any definitive conclusions about a parishioner’s failure to submit the card to him.

The second objection is more pastoral than canonical, and concerns a penitent’s privacy. While there are plenty of Catholics who are quite content to confess their sins face-to-face, in the sight of the priest (who may recognize them if he already knows them personally), there are also a significant number of faithful who prefer anonymity. There is certainly nothing wrong with a penitent preferring to use a confessional with a grill or other privacy-screen between him and the confessor; nor even with a person wishing to confess specifically to a priest who does not know him at all! Especially, though not exclusively, in cases where a penitent feels a particular embarrassment about having to confess a certain sin, it may be much easier to receive the sacrament in the darkened interior of a traditional confessional-box, from an unknown confessor whom he may very well never meet again. Even if a parishioner believes that the priest(s) of his own parish may not be able to identify him, the need to somehow reach around inside the confessional and hand the priest a card may very well enable him to do just that! Thus this system, while intended to encourage parishioners to go to confession before Easter, could actually discourage some of them from doing so.

To answer Janet’s question, therefore, the law concerning mandatory reception of the sacrament of penance has certainly not changed in our lifetimes. But the disciplinary practice at her childhood parish—which in any case was never a universal custom—is not in force throughout the Catholic Church today. The methods which the Church may use to urge or encourage Catholics to frequent the confessional can vary; but the need for us all to receive this sacrament regularly will always remain unchanged.