Do Sisters Have to Wear Their Habits?

Q: When I was a child in Catholic school, the nuns all wore full habits which reached all the way down to the floor.  Nowadays we’re lucky if they’ll even wear a cross that identifies them as a nun and not just a laywoman.  Aren’t nuns still required to wear their habits? … It doesn’t seem like anybody cares about enforcing the rules…  –Rick

A: Older readers, especially those who attended Catholic elementary schools, are no doubt well aware of the basic contrast between the habits which most sisters used to wear in decades past, and the way that sisters dress today.  (By the way, they’re sisters, not nuns—see “What’s the Difference Between Sisters and Nuns?” for more on this.)  In many cases the difference is dramatic!  But is it permitted?  Let’s take a look at the Church’s requirements when it comes to the habits that members of religious institutes wear.

Canon 669.1 gives us the very basic norm on this topic.  Religious—both men and women—are to wear the habit of their institute, in accord with proper law.  The next paragraph adds that if an institute of clerical religious does not have its own habit, they are to wear clerical dress (c. 669.2).  There are a number of different issues here, which in large part stem from the long and complex history of religious institutes in the Church.

In the nearly 2000 years that have elapsed since Christ established His Church on earth, groups of men and groups of women have repeatedly banded together to create religious institutes, for a very wide array of reasons.  For example, St. Anthony the Great (d. 351), who is known as the “Father of Monasticism,” was apparently the first to gather a group of men together in an organized religious community.  They lived an ascetic, contemplative life in the Egyptian desert, away from the world.

Contrast those 4th-century monks with the Missionaries of Charity, founded by St. Teresa of Calcutta (d. 1997) in the 20th century.  These women likewise live in a religious community, but their mission is quite different: they operate hospitals, soup-kitchens, orphanages, schools, and other charitable entities, aiming to reach “the poorest of the poor.”  The everyday life of a contemplative monk in Egypt, and that of a sister actively engaged in charitable work in India, are thus dissimilar—and the way that they dress may naturally reflect that.

And because so many different religious institutes exist for such radically different reasons, the Code of Canon Law doesn’t contain a lot of law that pertains to all of them.  Instead, as is mentioned in canon 669, each religious institute has its own proper law, approved by the appropriate ecclesiastical authorities.  This proper law binds all members of the institute, wherever in the world they happen to be—and nobody else.

As canon 669 indicates, one of the many things that an institute’s proper law has to address is the habit to be worn by its members.  The notion that persons consecrated to God should generally have an identifiable mode of dress has a theological basis: religious are recognizable as such by the habit that they wear, and that habit also constitutes a sign of their consecration to God, understood by all who might see them or come in contact with them.  The rationale for the religious habit was beautifully articulated by Pope  John Paul II in 1996, after a Synod held on the topic of religious life:

The Church must always seek to make her presence visible in everyday life, especially in contemporary culture, which is often very secularized and yet sensitive to the language of signs.  In this regard the Church has a right to expect a significant contribution from consecrated persons, called as they are in every situation to bear clear witness that they belong to Christ.  Since the habit is a sign of consecration, poverty and membership in a particular Religious family, I join the Fathers of the Synod in strongly recommending to men and women religious that they wear their proper habit, suitably adapted to the conditions of time and place.  Where valid reasons of their apostolate call for it, Religious, in conformity with the norms of their Institute, may also dress in a simple and modest manner, with an appropriate symbol, in such a way that their consecration is recognizable.  Institutes which from their origin or by provision of their Constitutions do not have a specific habit should ensure that the dress of their members corresponds in dignity and simplicity to the nature of their vocation. (Vita Consecrata 25, emphasis in original)

Note that John Paul II did not say, “all members of religious institutes have to wear a habit.”  Rather, he urged religious to “wear their proper habit,” as is required by the rules of their institutes.  In quite a few cases, religious used to wear “full habits which reached all the way down to the floor,” as Rick recalls; but these institutes subsequently changed their standard habits with the permission of their hierarchical superiors, and so members are not necessarily doing anything wrong when dress differently from their predecessors, 50 years ago or so.  The key issue here is not that religious have to wear a habit—it’s that religious have to obey the rules of their institutes.  As canon 573.2 tells us, all religious (no matter where or when their institute was founded, or what sort of work it does) profess the evangelical counsels of poverty, chastity, and obedience; so if the proper law of a particular institute mandates that all its members must wear X, then all members are expected to obey that law and wear X, whatever it might be.

Pope John Paul II also acknowledged that not all religious are even required to wear a habit: there are some institutes whose members have never had habits, but instead are required to wear simple clothes and (for example) a cross or pendant or other symbol that is unique to them—like the American Missionary Servants of the Blessed Trinity, who wear distinctive pins identifying them as Catholic religious.  These sisters are not violating any rules at all by not wearing a habit; they are simply obeying their own proper law.  Another institute of women religious which has never had habits are the Sisters of Social Service, founded over a century ago in Hungary.  When their proper law was approved, church authorities did not require these women to wear traditional habits, and they continue to wear ordinary clothing today—in full accord with their rule.

Many other institutes have habits, but their members may reasonably be exempted from wearing them while doing particular forms of work.  For example, if you think that Carthusian monks are required by law to wear their long habits when they work on their farms, driving tractors and operating other heavy farm machinery… think again.  It flies in the face of common sense to think that proper law would oblige religious to wear their habits when this could get in the way of their work—so Carthusians are doing nothing wrong when they wear jeans, t-shirts and work-boots like other farm laborers, as they work in their fields.

And as the abovementioned canon 669.2 observes, there are some religious institutes of priests, which do not have habits at all—instead, they have traditionally worn the typical black clerical clothes of the diocesan clergy.  (See “The Priesthood and the Vow of Poverty” for a more in-depth discussion of the distinction between diocesan priests, and priests who are members of religious institutes.)  Probably the best known example of a clerical religious institute without its own habit is the Society of Jesus (Jesuits); another is the Marians of the Immaculate Conception.  These religious dress exactly like parish priests, generally because their founders, for various historical reasons, concluded that wearing ordinary clerical clothes would be more appropriate for their work—and this was okayed by the church authorities who approved their rule.

All that being said, it’s worth noting that while some religious might not be required to wear distinctive clothing (either on certain occasions or all the time), they are still obliged to dress simply and modestly.  Just as all religious take vows of obedience, they all likewise take the vow of poverty (c. 573.2 again).  It would make no sense for the Carthusian monks just mentioned to be wearing expensive designer jeans while doing their farm chores, or for sisters from institutes with no habits to dress in the latest fashions from upscale shops.  As Pope John Paul said in the quote cited above, the clothing of religious who do not wear habits should “correspond in dignity and simplicity to the nature of their vocation.”

Sadly, there definitely have been cases where women religious in particular have simply disregarded the rules of their institute, deciding unilaterally that they would “make a better impression,” or “look more professional,” if they had a more fashionable hairstyle and wore stylish clothes.  Needless to say, in the eyes of the laity out in the world this does not make a good impression at all—if anything, it leads laypeople to wonder what happened to the vow of poverty!  Far more impressive (and even awe-inspiring, in some cases) is the sight of a man or woman dressed in the simple, inelegant habit of his/her institute, carrying a cheap handbag or briefcase and wearing low-priced shoes.

There is a good reason why the dirty, patched and ragged habit of St. Francis still inspires 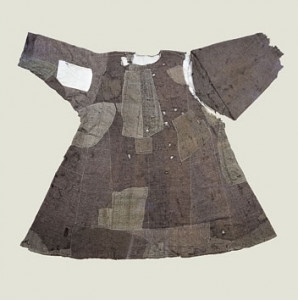 respect in so many visitors to his basilica in Assisi, where it is reverently preserved in a glass case today.  The man who willingly walked around in public while wearing this ratty robe clearly had dedicated himself entirely to God—since he obviously had no personal vanity, and couldn’t have cared less what worldly people thought of his appearance!  Of course nowadays, religious aren’t obliged to dress in such pitiful rags—but the plain and unfashionable clothing that their vow of obedience requires them to wear in public is often a powerful sermon in and of itself.

But dressing expensively isn’t the only way for a religious to violate his/her proper law in this regard.  During one especially brutal Roman summer, I ran into a sister who had removed the distinctive upper layer of her habit, and was thus working while wearing only her veil and under-dress.  This rendered her unidentifiable as a member of her specific institute—prompting me to ask with surprise, “Are you allowed to do that?”

She shrugged indifferently.  “I don’t know, I just did it.  It’s too hot!”  Of course this was a direct violation of the rule (something which unfortunately occurred regularly among the members of that particular institute).  Asking permission is a simple matter, and a hallmark of religious life.  If the rule requires a religious to swelter in a heavy habit during a heat-wave, and one’s superiors do not grant permission to take any part of that habit off… well, this is a classic instance where obedience is truly a virtue.

Now Rick has an answer to his question.  If he encounters sisters who aren’t wearing habits, it’s possible that they’re violating the proper law of their institute, but it isn’t necessarily so.  What really matters is that members of religious institutes are wearing whatever their rule requires them to wear.