Laypeople Can Always Baptize–But When Should They?

Q: My son was married to a non-Catholic girl for 7 years, and they have three boys. Just after she gave birth to the third, my daughter-in-law snapped and ran out on my son, taking the children with her and moving to [a city over a thousand miles away]. It’s been a nightmare.

After fighting a legal battle, she got a divorce and custody of the kids, whom my son is required to support. He can only visit them every few months, since they’re so far away and travelling there is expensive. Needless to say she isn’t raising the boys Catholic, so when my son visits them he takes them to Sunday Mass, and tries to teach them the catechism basics on his own as best he can.

The baby wasn’t baptized in their parish church, because my daughter-in-law ran off before there was even time to arrange it. My son intends to baptize him on his next visit himself. The baby isn’t in danger of death, but my son says that if he doesn’t baptize him, he’ll never get baptized because the mother will never allow it. Is there any problem with him doing this? –Liz

A: We’ve seen several times before (in “Inclusive Language and Baptismal Validity,” and “Sacraments and Personal Identity,” among others) that anybody can validly baptize. The reasons for this are theological: the Church teaches that baptism is necessary for salvation, and is the gateway to the other sacraments (c. 849). In an urgent life-and-death situation, a Catholic can’t be expected to search out a Catholic cleric, so as to baptize someone in full accord with the Church’s normal ritual—there simply isn’t time for that! All that’s required for a valid baptism in an emergency is that the baptizer (a) has the intention to do what the Church requires, (b) uses the correct formula of words, and (c) performs the correct action of pouring water over the person. That’s it.

But as Liz rightly observes, her baby grandson is not near death. The baby’s mother is apparently uninterested in having him baptized, although the father wants the child to be baptized and clearly intends to try (even if only at a distance) to ensure that he is raised Catholic. What’s the right way for the father to handle this difficult situation?

To begin with, there is no requirement that both parents have to agree about their child’s baptism. Canon 868.1 n. 1 states clearly that for an infant to be baptized licitly, at least one of the parents must give consent. Obviously that base is covered in this case.

The Church’s principal theological concern is that if a child is to be baptized, there has to be a realistic hope that the child will be brought up in the Catholic religion, as per canon 868.1 n.2. In this particular case, so long as the baby’s father is planning to do his best to raise the child a Catholic, this requirement is met. It doesn’t matter that the child no longer lives with his father, and the fact that the mother is herself not Catholic and not interested in the faith is likewise irrelevant. (Note for the record that the mother doesn’t appear to intend to raise the child in a different religion, either.)

In a normal, non-emergency situation, the person administering the sacrament of baptism is expected to be a cleric: canon 861.1 notes that the ordinary minister of this sacrament is a bishop, priest or deacon. Additionally, baptism is ordinarily the responsibility of the pastor of the parish where the person to be baptized lives (c. 530 n. 1), since the pastor has been entrusted with overseeing the general spiritual welfare of all the Catholic faithful residing within the territory of his parish (cf. cc. 515.1 and 519). On top of that, canon 857.1 asserts that the proper place for a non-emergency baptism is a church; the following paragraph specifies that it should as a rule be the parish of the child’s parents (c. 857.2). Ideally, therefore, Liz’s grandson should be baptized in his parents’ parish, by the pastor or another Catholic cleric.

But from the sound of things, it doesn’t seem that the baby ever visits his father’s home, so baptizing him at his father’s parish church is presumably impossible. The logical choice would therefore be to baptize the child in the parish where the baby and his mother reside. Liz’s son could conceivably talk with the pastor of that parish, apprise him of the situation (which the pastor should want to know about anyway, since these children are Catholics and live in the territory of his parish), and ask him to baptize the baby.   If this is physically doable, then Liz’s son should definitely aim to do this.

Since, however, Liz tells us that “the mother will never allow it,” it appears that there may be a problem with this option. We don’t know the full story here. If, let’s say, the baby’s mother refuses to let her infant out of her sight, so Liz’s son cannot take the baby to Mass together with the other children when he visits, then arranging for the baby’s baptism at the children’s parish may be out of the question.

If that’s the case, then what’s left? It could be that a sort of “stealth baptism” by the father, at the children’s home, is the only alternative. But before doing this, it’s imperative that Liz’s son first talk with the pastor of his own parish (and/or the pastor of the children’s parish) about this whole situation. Apart from the obvious pastoral issues at play here, by law a baptism is required to be recorded in the parish register (c. 877.1). As we saw in “Canon Law and Marriage Records,” when a person is baptized a Catholic, he has certain rights and obligations which unbaptized persons and other non-Catholics don’t have. If nobody knows that this baby is baptized except for his father, and there is no written record of the event anywhere, what will happen when this child is old enough to make his First Confession and Holy Communion? These and all other Catholic sacraments cannot be conferred on an unbaptized person—which is why any Catholic, whether a child or an adult, first has to present proof of his baptism before he can receive them.

Many parish priests have dealt with difficult sacramental situations that have arisen because a baptism either was never registered properly in the parish where it took place, or that parish’s register is lost or otherwise inaccessible (maybe the parish records were destroyed in a fire, or the person is a refugee and his parish records are located in a currently war-torn area). Sometimes these cases come about when a Catholic Grandma decided on her own to baptize her grandchild, because the parents were lapsed Catholics and didn’t intend to have the child baptized a Catholic themselves. When the child is older, sometimes (though not always!) Grandma tells him that he was baptized, or some other relative may know about what happened. And if that child grows up and wants to marry a Catholic in a Catholic wedding ceremony, the parish priest needs to know whether he is a baptized Catholic or not—since the possible need for a dispensation from disparity of cult, or permission for a mixed marriage, will hinge on it! (See “Marriage Between a Catholic and a Non-Catholic” for more on this subject.)

If it truly is necessary for Liz’s son to baptize the baby himself, the pastor of the parish in which the site of the baptism is territorially located needs to know about it, and record it in the parish’s baptismal register. In other words, lay persons have the power to administer the sacrament of baptism, but they should not be doing so willy-nilly on their own, without the involvement—or at least the knowledge—of the local clergy. (A similar issue, regarding different sacraments, was discussed back in “Homeschooling and Catechetics.”) Anyone looking for a real-life example of the tremendously problematic implications of such activity need only look at the case of Edgardo Mortara.

The Mortara family had a servant girl who was a Catholic, which incidentally was technically illegal: by law, Jews living in the Papal States were not permitted to have Catholic servants, out of concern that Catholics working in a non-Christian environment might ultimately lose their faith. When little Edgardo fell deathly ill, the girl baptized him, without telling his parents. (See “Can a Baby be Baptized Against the Parents’ Wishes?” for the Church’s current law in such a situation.)

But Edgardo unexpectedly recovered, and word of his secret baptism somehow reached the Church’s authorities. Under civil (not canon) law at the time, a Catholic child could not be raised by non-Catholic parents—so Edgardo was forcibly taken away from his parents and sent to a Catholic orphanage in Rome. Nowadays, of course, such an action would be unthinkable, as a violation of the rights of the parents to raise their own child, and also of the child’s right to be raised by his own family. But it’s important to keep in mind that we live in a different era, when very few countries of the world have an official state religion. Consequently, what was legal and considered reasonable back then is very different from what would be acceptable today!

It’s no surprise that the Mortara family was devastated. When Edgardo was old enough to 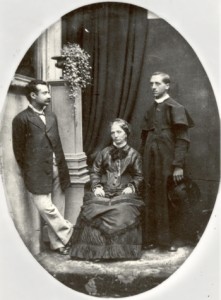 understand, he declared that he was glad to be a Catholic and did not want to return to his parents’ faith. Eventually Edgardo became a Catholic priest (seen here in a family photo), and tried unsuccessfully to convert his relatives to the Catholic faith.

On top of the understandable familial distress, this incident ignited a political firestorm against Pope Pius IX and the Papal States—because it happened to occur at the time when anti-Catholic political forces in Europe were uniting against the Church, and were trying to seize the Papal States from the Pope in order to create a united Italy. One of Pius IX’s loudest critics in the Mortara affair was Napoleon III, hardly a model-ruler when it came to human rights! And the Duke of Savoy (today a province of Italy) used the Mortara case as a pretext to continue his efforts to galvanize military opposition to the papacy. In short, Edgardo and his family became a convenient excuse for anti-Catholic rulers to point disparaging fingers at the Pope. The Papal States were definitively conquered and forcibly annexed to the new nation of Italy only a few years later.

History played out in this way, in part because a laywoman had baptized a baby on her own initiative.

Canonically, it’s easy to assert that Liz’s son has every right to ensure that his infant son is baptized a Catholic. It’s equally easy to argue that the Mortara family’s servant girl had acted reasonably, since Edgardo really was near death when she baptized him, and presumably she would never have done this if the boy had been expected to survive. But the point is, if a lay-baptism like Edgardo’s was performed rightly and yet had such enormous and totally unexpected repercussions, who can imagine what might potentially happen if a lay-baptism is performed in circumstances that are legally less clear-cut? This is why the pastor of one’s parish should, at a bare minimum, be “in the loop” regarding the administration of Catholic sacraments within the territory of his parish, to the extent that this is humanly possible. Liz’s son should not baptize his child on his own, without at the very least first conferring with the parish priest about the situation.