If the Church Has Never Permitted Divorce, Why Did Henry VIII Expect the Pope to Give Him One?

A: Derek’s question pertains to events which took place in the 1520’s, and led ultimately to the King of England breaking with the Catholic Church and declaring himself head of the Church of England.  All of this happened nearly 500 years ago, but the technical canonical issue which Henry and his advisors argued, in a vain attempt to convince the Pope to permit Henry to remarry while his first wife was still living, is actually still relevant today.  In fact, the current Code of Canon Law contains one canon which undoubtedly exists as a direct result of Henry VIII’s actions.  Those of us who studied English history in high school might think we know what really happened—but the precise legal argument was more complex than many realize.  Let’s take a look at the historical facts.

Young Henry was never expected to become King of England—because he had an elder brother, Arthur, who was in line to inherit the throne from their father, King Henry VII.  As was typical of European royalty at the time, Arthur’s parents began searching for a suitable wife for him when he was still a tiny child.  After all, Arthur’s wife would be Queen of England, so his marriage would have obvious political ramifications.

Arthur was “betrothed” to Catherine of Aragon, the daughter of King Ferdinand and Queen Isabella of Spain, in 1488.  (Note that Catherine was born in December 1485, and Arthur was a few months younger—and do the math.)  This “betrothal,” or official engagement, involved the signing of a treaty between England and Spain; and needless to say, the two toddlers had no say in the matter!  They were married in a Catholic wedding ceremony in London in November 1501, when both were just 15 years old.

Just a few months later, Arthur died of an illness, leaving Catherine a teenaged widow.  Arthur’s father Henry VII was still living, and he suddenly had to rethink the plans for his succession.  His younger son Henry was now in line to become King of England, and it was logical to think of marrying him off to his elder brother’s wife, Catherine of Aragon.  In this way, the political benefits originally envisioned from her marriage to Arthur would still remain.

There was a canonical problem with this, however, and it involved the impediment of affinity in the collateral line.  This impediment, which no longer exists, was discussed in more detail in “Can In-Laws Marry in the Church?” but in short, marrying a sibling of your first spouse used to be prohibited by the Church.  This impediment, which stems from ancient Roman civil law, was doubtless established because of concerns that repeated inter-marriage between two families could potentially complicate blood-lines, ultimately leading to genetic problems in the offspring of such marriages.  Since Catherine of Aragon was young Henry’s sister-in-law, she could not marry Henry due to the impediment.

But there was an easy legal way around this, which is still employed countless times every day in the Catholic Church: the couple could request a dispensation from the impediment.  (See “Marriage Between a Catholic and a Non-Catholic” for a more in-depth discussion of what a dispensation is.)  The main argument in favor of the Pope’s granting this dispensation would have been the political bond that such a marriage would create between England and Spain.  Pope Julius II granted the dispensation in 1503, and Henry and Catherine were then married in the Church.  Canonically, that should have been the end of the matter.

But it wasn’t, because Catherine failed to produce a son who survived infancy, and Henry desperately wanted a son of his own, to be his heir to the English throne.  As Catherine 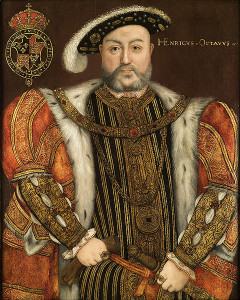 aged, and it became increasingly clear that she would have no more children, Henry decided that he needed to marry someone else who could.  He wanted the Pope to declare his marriage to Catherine invalid, so he could marry another woman in a Catholic wedding ceremony.  While this was/is often referred to as a request for a “divorce,” Henry was actually seeking an annulment, claiming that his marriage to Catherine was not really a marriage at all.

Many readers are probably already familiar with the story up to this point.  What is less well known is the precise canonical argument which Henry and his advisors made to the Pope.  Not only did their petition suggest that Henry and Catherine’s marriage was null, but it was also a direct challenge to papal authority.

If a man marries his brother’s wife and thus disgraces his brother, they shall be childless because of this incest.

Consequently, he asserted that this impediment could never be dispensed—and so no Pope would ever be able to grant a dispensation permitting such a couple to marry.  And if Catherine and Henry were impeded from marrying, thanks to Catherine’s first marriage to Henry’s brother Arthur, then their church wedding had no canonical effect.  It logically followed (or so Henry argued) that the King was not really married, and thus should be declared free to marry somebody else in the Church.

Put differently, the issue involved the origin of the impediment of affinity.  In “Are There Any Limitations on the Power of the Pope?” we saw that the Pope wields tremendous power, but he is always limited by divine law.  The Pope could never grant a dispensation permitting (for example) a father to marry his daughter, because this is a direct violation of natural law, established by God Himself.  In contrast, the Pope can certainly dispense from a law that is human in origin, like an age-limit or a procedural deadline.  So who invented the impediment of affinity: church officials, or God Himself?  The validity of Henry’s marriage hinged on the answer.

While political concerns may have caused Pope Clement VII to take his time in responding, he certainly didn’t waffle on the actual legal issue itself.  The Church’s position, both then and now, is that if there is any question about whether a marriage impediment may be dispensed or not, because of uncertainty about it being of divine or merely ecclesiastical (i.e., human) origin, the final arbiter of such a question is… the Pope.  If the Pope says he can dispense from a law because it is a law made by man, then he can dispense from it!  The Church has included this assertion in the Code of Canon Law even today, where it is found in canon 1075.1: only the supreme authority of the Church [not the King of England or anybody else!] can declare authentically when divine law prohibits or nullifies marriage.

Lest anyone think that Henry’s argument was biblically airtight, it should be noted that Deuteronomy 25:5 directly contradicts the verse from Leviticus which Henry and his advisors quoted in support of their argument.  In fact, it actually states that a brother-in-law is required to marry his brother’s widow, something which most certainly has never been considered obligatory by the Catholic Church:

When brothers live together and one of them dies without a son, the widow of the deceased shall not marry anyone outside the family; but her husband’s brother shall go to her and perform the duty of a brother-in-law by marrying her.

Needless to say, while the previous biblical verse might have seemed helpful to Henry’s cause, this one was not.

As we know, Henry didn’t take the Pope’s no for an answer, and responded by declaring that he, and not the Pope, was the true head of the Church in England.  The King’s marriage to Catherine was declared null by willing yes-men in England, he then married Anne Boleyn in a church ceremony (which of course was not considered valid by the Catholic Church), and the rest is history.

It is ironic that Henry insisted that the impediment of affinity in the collateral line—i.e., between brother- and sister-in-law—was of divine origin and could never be changed… because Saint John Paul II eliminated it altogether from the new Code of Canon Law, which he promulgated in 1983 and which remains in force today.  The only marriage impediment involving affinity which still exists in current law is found in canon 1092, and it involves only affinity in the direct line (marrying one’s mother/father-in-law, or daughter/son-in-law).  Yet even this impediment can be dispensed, as the Church does not consider it to be a matter of divine law.

Millions of English Christians have been lost to the Catholic Church by King Henry VIII’s action, which created a new ecclesiastical structure in his realm, answerable only to him.  Nowadays, the Church of England does allow remarriage after a civil divorce, but the Catholic Church’s theological position on this issue remains unchanged.  If a Catholic wishes to remarry in the Church while his/her first spouse is still living, this is impossible—unless the first marriage is found to have been null from its very start, which means it never really existed to begin with.  In Henry’s case, it didn’t matter that the petitioner for the annulment was a King; the Church’s laws on marriage applied to him then, as they do to all of us Catholics today.