Receiving Holy Communion Outside of Mass

Q: At my parish the priests will give people Holy Communion at any time of day, if they were unable for some reason to attend daily Mass.  I always assumed this was the norm.

But I was travelling this summer, and arrived in another city in the afternoon, after all the daily Masses had been celebrated.  I went to the parish office of the closest church and asked to receive the Eucharist.  A priest of the parish told me that “if you want to receive Communion, you have to attend Mass.”  He refused to give me Communion.

The practices at these two parishes are contradictory, so I assume they can’t both be right….  Which one is following canon law?  –Rebecca

A:  Rebecca’s assumption is accurate: praxis at one of the parishes she mentions is in accord with canon law, and the other is in violation of it.  Canon law is very clear on this subject, so let’s take a look at what the code has to say.

The canon that is directly relevant here is canon 918, and it tells us the following:

It is highly recommended that the faithful receive Holy Communion during the Eucharistic Celebration itself.  It is to be administered outside the Mass, however, to those who request it for a just cause, with the liturgical rites being observed.

The first sentence gives us what is expected to be the norm: if a Catholic wants to receive the Eucharist, he simply attends Mass and receives It at the appropriate point in the Mass.  But the wording tells us immediately that this is not absolute; instead, the canon asserts that it is “highly recommended.”  This means, obviously, that there’s an alternative!

And we read about that alternative in the very next sentence, which tells us that a Catholic can receive Holy Communion outside of Mass if he requests it “for a just cause.”  What does this mean?

As we saw in “How Can a Priest Transfer to Another Diocese?” the term “just cause” isn’t formally defined anywhere in the Code of Canon Law.  We simply have to bear in mind that a “just cause” is a lower standard than a “grave cause,” but a higher one than no cause at all—and then apply some common sense.  The term “just cause” appears in a number of different contexts in the Code of Canon Law (see “Is My Confession Valid, If the Priest Changes the Words of Absolution?” and “How Many Masses Can a Priest Say on Sundays?” for more examples); but generally, a cause that is “just” is one that is reasonable.

So in what kind of situations might it be reasonable for a Catholic to ask to receive Holy Communion outside of Mass?  Without a doubt, there must be hundreds of legitimate scenarios that would meet this definition; but perhaps the most obvious ones involve a genuine inability to attend a daily Mass at the scheduled time.  Let’s say that you were en route to Mass and your car abruptly broke down—and by the time you were mobile again, the Mass had long finished.  Maybe you’ve just moved to a new city or are visiting relatives there, and you drove to Mass but managed to get lost along the way, arriving at the church just as the priest gave the final blessing.

These are scenarios which are unusual, “once-off” occasions—but there are others which arise on a regular basis.  Imagine a mother with young children, who truly wants to get to the only daily Mass in town, which is at 7 AM … but she simply cannot wake the kids and get them dressed, fed, into the car, and on the way to church in time.  Or perhaps a factory-worker is obliged to work a shift which prevents him from attending daily Mass, 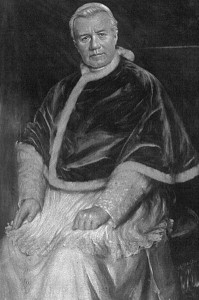 and the soonest he can get to his parish church is an hour or more after the end of the last Mass.

The provision for receiving Communion outside of Mass, as described in canon 918, was not the random work of some canonist (or even of a Pope), who simply made it up on his own because he liked the idea.  As we have seen so many times before in this space, canon law is driven by theology.  A by-now classic articulation of the Church’s teaching on the topic of receiving Communion often may be found in the 1905 decree Sacra Tridentina, “On Frequent and Daily Reception of Holy Communion.”  Issued by Pope St. Pius X (reigned 1903-1914), who was known as the “Pope of the Eucharist,” this decree reflected a dramatic change in the common practice of the time—which for many Catholics was reception of Holy Communion only once a year!  As Sacra Tridentina tells us,

Frequent and daily Communion, as a practice most earnestly desired by Christ our Lord and by the Catholic Church, should be open to all the faithful, of whatever rank and condition of life; so that no one who is in the state of grace, and who approaches the Holy Table with a right and devout intention (recta piaque mente) can be prohibited therefrom.

Any Catholic with a correct understanding of the Real Presence of Jesus Christ in the Eucharist knows that devoutly receiving Holy Communion as often as possible is a good thing, and so the Church should make every reasonable effort to accommodate the faithful in their desire to receive Our Lord.  Canon law once again follows theology here, and tells us in canon 843.1 that the clergy cannot deny the sacraments (including of course the Eucharist) to Catholics who seek them at appropriate times, are properly disposed, and aren’t prohibited by law from receiving them.

(This is, incidentally, why—as we saw in “Do Bishops Have the Authority to Cancel Masses Completely?” and “Are We Under Interdict? Sanctions, Part V,” among others—depriving the faithful of the ability to attend Mass and receive the sacraments during the worldwide lockdowns in the past couple of years was so morally egregious!  Catholics who were spiritually well prepared and anxious to receive Holy Communion were unable to do so, because clergy unlawfully refused to administer this and other sacraments to them.)

So if the clergy are expected to give the faithful Holy Communion outside of Mass “for a just cause,” and if “a just cause” is one that is reasonable … what sorts of situations would be unreasonable, and warrant a refusal?  There are plenty of scenarios that can easily be construed as unreasonable—and perhaps the most obvious one is the Catholic who is perfectly capable of attending daily Mass at the regularly scheduled time and receiving the Eucharist then, but who for frivolous reasons (or no reason at all!) doesn’t bother to show up.  If such a person later approaches a priest and asks to receive Communion, it’s only natural for the priest to ask, “Why couldn’t you just come to Mass?”

A priest could also conclude that a request is unreasonable if it is made by someone who gives no indication of being sincerely prepared to receive the sacrament.  Sadly, the world is filled with lonely folks who might pester a priest to receive the Eucharist, simply because it will oblige him to give the person the attention he so desperately craves.  Or perhaps for some reason a person is trying to impress a priest by demonstrating a piety which seems feigned.  While it can be argued that a priest should give such a person the benefit of the doubt, in some cases it might be crystal-clear that a Catholic is asking to receive Communion for the wrong reasons.

Yet another example of an unreasonable request would be one made in the middle of the night (and yes, this kind of thing really does happen!), or some other time of day when the parish clergy are genuinely unable to accommodate the request—let’s say that the priests also teach at a local high school and aren’t available for ministry at certain times of day.  That said, however, note for the record that if a Catholic wants to receive the Eucharist because he is on his death-bed, that would instantly make any request a reasonable one, no matter what the time of day or how busy a priest is otherwise (cf. cc. 921.1 and 922).

There’s no denying that even when dealing with devout parishioners and their reasonable requests, things could conceivably get out of hand—if, let’s say, a parish priest ends up being interrupted 25-30 times per day by sincere individuals asking to receive Holy Communion outside of Mass.  But if such a large number of people are truly unable to attend the regularly scheduled Mass, it could be that the solution is simply to change the schedule, enabling them to receive Communion at the normal point during daily Mass!  Alternately, if changing the schedule won’t resolve the situation, parish clergy might (and in some parts of the world, they do) arrange to distribute Holy Communion at a set time(s) of day other than during the daily Mass.  In this way, many of the faithful can receive Our Lord in the Eucharist at once, eliminating the need for a parish priest to repeatedly leave his parish work to go over to the church, in order to minister to only one person at a time.

Returning now to Rebecca’s original question, we can see that at her parish, the clergy are indeed following the law, since they “will give people Holy Communion at any time of day, if they were unable for some reason to attend daily Mass.”  In contrast, the priest at the parish which Rebecca visited on vacation—who told her that “if you want to receive Communion, you have to attend Mass”—was violating the law, by denying Rebecca’s right to receive the sacrament of the Most Holy Eucharist.  You honestly have to wonder where the clergy at that parish got the notion that they can only distribute Communion within the context of Mass.  After all, there is nothing novel about the Church’s law on this subject: the canons cited above have all been in force since Pope John Paul II promulgated the current Code of Canon Law in 1983!

So now the Church’s rules on receiving Holy Communion should be clear.  While it’s the norm for Catholics to receive the Eucharist during Mass, there are plenty of times when this is logistically impossible—so the Church has provided that they may receive Communion outside of Mass when necessary.  In this way, the faithful are able to receive Our Lord Jesus Christ in the Eucharist, even when they are unable to attend daily Mass.