(For years, readers have returned to this article again and again in the weeks just before Christmas, which would indicate that the problem it addresses still persists.  And now that the Catholic faith and the Church’s sacramental life are being entirely jettisoned by some clergy in some parts of the world “because of the virus,” the need to reiterate the spiritual importance of individual and integral confession has become even greater.  That’s why this is being re-posted here once again.  A blessed and happy Christmas to all readers!)

Q: Last year, I visited my relatives at Christmas time, and we all went to their parish to a communal penance service before Christmas. There were probably almost a hundred people there, and only one priest. He didn’t hear each person’s confession, as we expected. Instead, he stood near the altar, said some prayers, and blessed all of us. Then he told us we were absolved of our sins, and that was it. Was that priest wrong to do what he did? Did God really forgive us our sins?  –Robert

A:  For years, there have been reports from a number of countries about situations such as the one Robert describes: priests have administered general absolution to a group of people seeking the sacrament of penance, usually on the grounds that it was impossible from a practical standpoint to hear the confession of every single person present. There is indeed a provision in the Code of Canon Law for general absolution, but its purpose is much misunderstood—and that despite the fact that the late Pope John Paul II repeatedly issued documents and other public statements calling attention to its abuse.  Let’s first take a look at the ordinary manner in which the sacrament of penance is to be administered, and then look at the extraordinary situations in which general absolution may legitimately be employed.

The basic norm for the sacrament of penance is clearly laid out for us in canon 960: Individual and integral confession and absolution constitute the sole ordinary means by which one who is conscious of grave sin is reconciled with God and with the Church.

What does this mean? Confession must be individual, that is, one penitent confesses his sins to one priest; and it must be integral, meaning that every mortal sin of which the penitent is aware must be confessed. In other words, a priest is supposed to hear confessions one at a time, and penitents are to enumerate in full all the serious sins that they can recall.

Obviously, in a parish with few priests and large numbers of parishioners, this is a potentially time-consuming task. It is even more so during Advent and Lent, when the 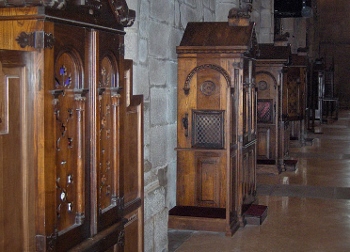 faithful traditionally make a special point of going to confession in preparation for Christmas and Easter. Parish priests certainly are aware in advance that the lines for confession are going to be long at these times of year, and logically should schedule extra times for hearing confessions in order to accommodate them. This is not merely a matter of pastoral sensitivity—the law requires that adequate opportunity be provided for parishioners to receive the sacrament of penance. This responsibility is spelled out in detail in canon 986.1: all pastors, as well as any other clergy who are entrusted with the care of souls (hospital or prison chaplains, for example), are obliged to provide for the hearing of the confessions of the faithful committed to their care—and they are to provide the faithful with the opportunity to make individual confessions on days and at times arranged to suit them.

What, then, is the purpose of general absolution, which involves the granting of absolution to a group without the priest having heard each person’s individual confession of sins? Canon 961.1 explains that there are two situations when it may properly be used.

The first (c. 961.1 n.1) obtains when danger of death is imminent, and there is insufficient time for the available priest(s) to hear the confessions of everyone present. The most obvious situation in which this might happen is a time of war. Imagine, for example, that Sunday Mass is being celebrated in a parish church that is more or less crowded with parishioners. Suddenly, planes are heard overhead, and bombs begin to fall. It is quite possible that the church may be hit and everyone inside killed in a matter of moments. At that point, the celebrant of the Mass would rightly move to give general absolution quickly to the entire congregation.

The second situation (c. 961.1 n.2) pertains to circumstances which are less extreme. It involves a “grave necessity,” described as a large number of penitents and an insufficient number of available confessors, such that there is no time to hear everyone’s confession, and the faithful would be deprived of the grace of the sacrament for a lengthy period of time.

This sounds like it fits the situation Robert describes, right? Wrong. The canon continues by noting specifically that a “grave necessity” does not exist simply when there is a large gathering of penitents, such as can occur on a major feast day or pilgrimage. Thus this canon does not apply when a priest is faced with large numbers of parishioners who all want the sacrament of penance before Christmas.

So if the annual Christmas confession crunch does not constitute a “grave necessity,” what does? Well, perhaps in a country rife with religious persecution, the only Catholic priest for hundreds of miles has been told by political authorities that he must leave the country in 24 hours, leaving behind hundreds of Catholics who will be deprived of a priest for an undetermined length of time. Or maybe a group of soldiers has unexpectedly been ordered to leave immediately for another location, but without their military chaplain, so they may not see another Catholic priest for months. Other possibilities no doubt exist—all of which would be truly extraordinary situations, far from the run-of-the-mill daily life of a Catholic parish.

These are a couple of imaginary situations that might possibly constitute “grave necessity” for the purposes of this canon. We are, however, actually spared from trying to determine for ourselves what is a grave necessity and what isn’t—because canon 962.2 notes that only the diocesan bishop can judge whether or not a grave necessity exists in a particular situation. A parish priest, therefore, may not make this determination on his own, without consulting his bishop.

Thus there is no canonical justification whatsoever for the administration of general absolution at a penance service, simply because there are too many people present for individual confessions to be heard. The failure of a parish to schedule extra confession times during the run-up to Christmas certainly does not result in a “grave necessity.” After all, it will be a surprise to no one when the pre-Christmas lines to the confessionals during the regularly scheduled times (or at a lone penance service) extend straight out the door! Seeking creative ways to avoid hearing every individual’s confession, by wrongly applying the canons on general absolution, is a violation of that canon 986 cited above. Keep in mind also that it is a direct violation of a penitent’s right to receive the sacrament of penance. As we saw in “When Can a Priest Refuse to Absolve a Penitent in the Confessional?” Catholics have the right to receive this or any other sacrament when they opportunely ask for it, are properly disposed, and are not prohibited by law from receiving it (c. 843.1).

Additionally, it is not widely known that persons who receive general absolution have an additional obligation, if they are to benefit validly from the sacrament. Canon 962.1 requires that they intend in due time to confess those sins which they could not confess at that moment. In other words, if/when the extraordinary circumstances that necessitated the use of general absolution come to an end, and the penitent is then able to go to private confession, he must do so. Persons who receive general absolution are supposed to be told of this obligation at the time it is administered (c. 962.2). It does not appear that this was done in Robert’s case.

For the record, readers should be aware that while many parishes hold “communal penance services” in order to facilitate the need for parishioners to go to confession in the days leading up to Christmas, this term does not automatically imply that general absolution will be administered. There is certainly nothing wrong with a service that involves a collective examen of conscience and prayers in preparation to receive the sacrament, if it is then followed by individual confessions.

Did God actually forgive Robert’s sins at that service he attended last year? This is a question outside the scope of canon law! As Catholics, we believe that if we act in accord with canon law—law which follows Catholic theology and has been promulgated by the Pope, the Vicar of Christ—the sacraments we receive will have spiritual effect. But we should also keep in mind that God, Who is Almighty, is not bound by the Code of Canon Law, and can act outside of it if He so chooses. If Robert had intended last Christmas to confess any mortal sins, these must be mentioned in an individual confession, as discussed above. But otherwise, perhaps it’s best simply to commend this past experience to God, and to trust that while we want Him to forgive us our sins, He wants this even more than we do.