What Makes a Mass Invalid? (Part I)

Q1: My book-study group started talking about what constitutes a valid Mass.  One person is under the impression that as long as the consecration is completed properly, the Mass would be valid. Another person suggested that even if a part of the order of Mass is omitted, or all the words are not said correctly, Mass is valid as long as intent was pure in the celebrant. Could you help clarify? –Katherine

Q2:  I have a question that I think you have not answered already! During Mass yesterday the priest, instead of using the Gloria used “Angels We Have Heard on High.”  Does this make the Mass invalid? –Luke

A: It is a sad fact of life these days that liturgical irregularities of all kinds occur far too frequently during the celebration of Mass.  Needless to say, deliberately failing to follow the Mass rubrics correctly is never okay!  But when does a liturgical abuse cause a Mass to actually be invalid?

In “Marriage and Annulment,” we saw that the term validity refers to whether or not the external administration of a sacrament actually has spiritual effect.  As Catholic sacramental theology has taught for centuries, sacramental validity requires (a) the correct formula of words, (b) the correct matter, and (c) the right intention on the part of the minister of the sacrament who has the authority to administer it.  A problem with any of these three elements can invalidate a sacrament—meaning that it may have appeared that a sacrament was being administered to those who were present, but in reality no sacrament was conferred at all.

Here in this space, we have seen many examples of sacraments being administered invalidly: in “Inclusive Language and Baptismal Validity,” for example, we looked at a situation in which the sacrament of baptism was invalidly administered because the minister used a formula of words which was not correct.  We saw an instance of invalidity caused by the failure of a minister of the sacrament to have the requisite intention in “Can You Marry Validly While Intoxicated?”  And “The Eucharist and Sacramental Validity, Part I” addresses a case where using improper matter would invalidate a sacrament (a case which happens to be relevant to the issue at hand).

Now technically, the Mass itself is not a sacrament—but the Holy Eucharist definitely is, and it is during the celebration of Mass that a priest consecrates bread and wine, which become the Body and Blood of Christ.  The consecration is far and away the most critical part of the Mass, and it’s absolutely vital for a priest to do it right.  That’s chiefly because, as the Catechism repeatedly explains, the Mass is a sacrifice:

In the institution narrative, the power of the words and the action of Christ, and the power of the Holy Spirit, make sacramentally present under the species of bread and wine Christ’s Body and Blood, His sacrifice offered on the cross once for all. (CCC 1353)

The Eucharist is thus a sacrifice because it re-presents (makes present) the sacrifice of the cross, because it is its memorial and because it applies its fruit: [Christ], our Lord and God, was once and for all to offer Himself to God the Father by His death on the altar of the cross, to accomplish there an everlasting redemption. But because His priesthood was not to end with His death, at the Last Supper “on the night when He was betrayed,” [He wanted] to leave to His beloved spouse the Church a visible sacrifice (as the nature of man demands) by which the bloody sacrifice which He was to accomplish once for all on the cross would be re-presented, its memory perpetuated until the end of the world, and its salutary power be applied to the forgiveness of the sins we daily commit. (CCC 1366)

The sacrifice of Christ and the sacrifice of the Eucharist are one single sacrifice: “The Victim is one and the same: the same now offers through the ministry of priests, Who then offered Himself on the cross; only the manner of offering is different.” “In this divine sacrifice which is celebrated in the Mass, the same Christ Who offered Himself once in a bloody manner on the altar of the cross is contained and is offered in an unbloody manner.” (CCC 1367, emphases added)

So practically speaking, what is necessary for a Mass to be a real sacrifice?  The answer is unequivocal: a valid consecration.  It is necessary for the priest to say the correct words of consecration, as they are written in the approved liturgical books (cf. c. 928); to use proper matter, which is unleavened wheat bread and natural, unadulterated grape wine (cf. cc. 924 and 926; see also “The Eucharist and Sacramental Validity, Part I” and “Part II”); and to have the intention to do what the Church intends, when performing the consecration.  If a Catholic priest follows all of these points correctly, the Mass is valid.  If he doesn’t … as a rule, it isn’t.

That said, it is definitely true that the other parts of the Mass are important, and should be performed correctly and with care—because making the effort to ensure that liturgical rites are done correctly is an important aspect of giving proper worship to Almighty God.  Put differently, it’s hard to argue that you are worshipping your Creator as He deserves, if you’re performing the various elements of the liturgy haphazardly and with indifference!  There are, however, countless types of liturgical abuses which could occur during Mass, that nevertheless would not render the Mass invalid.  Using incorrect Mass readings for the day, or changing the Offertory prayers, or skipping the Kyrie (to mention only a few possibilities) would obviously be wrong and should not be done; but such wrongs would not, in and of themselves, render the Mass invalid.

Singing a Christmas carol instead of the Gloria is another “good” example of this: such an action is of course not in accord with the rubrics, and thus would constitute an abuse—but it’s entirely possible for the priest at such a Mass to consecrate the Body and Blood of Christ correctly (i.e., validly) all the same.  Luke now has the answer to his question.

Bear in mind that sometimes, violations of liturgical norms occur for reasons which are entirely understandable.  Throughout the course of Christian history, there have undoubtedly been thousands of instances where Catholic priests who were imprisoned for their faith, or were otherwise trying to operate in extraordinary circumstances, celebrated Masses which were—through necessity—chock-full of liturgical irregularities, but nevertheless were valid and surely pleasing to God.  Stories exist, for example, of Catholic prisoners in Soviet gulags who carefully fermented their own wine and managed to bake their own unleavened wheat hosts, which a priest-prisoner then consecrated in a clandestine liturgy, often whispered in a bunk-bed in the dead of night.  Needless to say, these priests had no missal or lectionary, so they couldn’t possibly have read the proper readings and gospel of the day; they had no vestments, no gold paten or chalice, and no consecrated altar (cf. c. 1237, and see “Canon Law and the Private Ownership of Relics (Part I)” for more on this) upon which to say their Mass.  Technically, of course, they were “violating” the liturgical norms; but this was obviously due to their exceptional circumstances, and was not the result of sloppy liturgical indifference!  Since (like most priests) these priest-prisoners could recite the words of consecration from memory, they managed nonetheless to say valid, and surely very beautiful Masses. 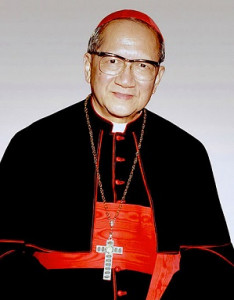 became the Coadjutor Archbishop of Saigon in 1975.  (See “Bishops, Coadjutors, and Auxiliaries” for more on what a coadjutor is.)  When the city fell to communist forces shortly thereafter, he was arrested and spent nearly ten years in solitary confinement, some of it in truly appalling conditions.  He later described how he managed to say Mass:

When I was arrested, I had to leave immediately, with empty hands.  The next day I was allowed to request in writing the things I needed most: clothes, toothpaste … I wrote to my addressee: “Please, could you send me a bit of medicine for my bad stomach?”  The faithful understood what I meant and they sent a little bottle of wine for Mass, which they labeled “stomach medicine,” as well as some hosts sealed in a flashlight to protect them from the humidity….

I will never be able to express my immense joy: every day, with three drops of wine and one drop of water in the palm of my hand, I celebrated my Mass. (Five Loaves and Two Fish, pp. 35-36)

It should be clear to all that Archbishop (later Cardinal) Thuan would very much have wanted to say Mass in full accord with all the liturgical norms, and he failed to observe them simply because he couldn’t.  But there’s no question that his Mass was valid.

Let’s turn now to Katherine’s question, which is more sweeping than Luke’s, and for that reason the answer is more complicated.  The opinion of the first person she mentions is, as we have already seen here, the correct one; the second one is partly right but dangerously misleading.  As was just discussed, Mass can certainly be valid “even if a part of the Mass is omitted,” assuming obviously that the omitted part doesn’t involve the consecration itself.  But it is not at all accurate to assert that if “all the words are not said correctly, Mass is valid as long as intent was pure in the celebrant.”

As is the case with the administration of any sacrament, having the right intention is vital—but it isn’t everything!  Imagine a very elderly, sickly, or exhausted priest, celebrating Mass alone, who through human frailty gets mixed up and says the words of consecration of the chalice, when he meant to consecrate the host.  His intention might be as pure as the driven snow, but the fact remains that he did not consecrate the bread into the Body of Christ, and thus he did not say a valid Mass.

As we saw in “Canon Law and Consecrating the Eucharist,” a priest who realizes that he made such a serious error should then say the correct words of consecration over the bread/wine (as applicable), so as to fix it.  But what if the priest genuinely fails to catch his mistake, and there is nobody present to point it out to him?  Catholic theology and canon law together will logically conclude that he might not be at fault at all, in the moral sense; but his good intention doesn’t make the Mass valid.  (One important take-away here is that if you attend a Mass where this sort of thing happens, and the priest clearly doesn’t realize what he just inadvertently did, say something!  The validity—or not—of the Mass you’re attending depends on it, and you aren’t being disrespectful by politely interrupting the priest to point out to him this vital fact.)

So now we can see that there are lots of things that during Mass can conceivably be done incorrectly, or inserted/omitted, without necessarily affecting its validity.  Deliberate liturgical abuses are objectionable, to be sure; but fortunately, they don’t automatically render a Mass invalid.