Q: There are certain enumerated acts which trigger automatic, latae sententiae excommunication.  Some of these acts could conceivably be performed by a Pope; for instance, it seems a Pope could help procure an abortion.  Is it, then, theoretically possible for a Pope to be excommunicated?

When I have asked others about this in the past, the response has usually been, “God forbid that a Pope would do such a thing!” I agree with that sentiment, of course, but it dodges the question.

My guess is that, were a Pope to abuse his free will in this way, God would short-circuit the dilemma by striking him dead before the theoretical problem became a real dilemma. –Howard

A: In “Can a Pope Commit Heresy? (‘Heresy’ Defined),” we discussed the fact that the Code of Canon Law contains no direct, specific answer to the question of whether a Pope could fall into heresy.  Still, we saw that we can rest assured Christ will never abandon the Church to error, as He said to Peter in Matthew 16:18-19:

Needless to say, it has never happened in the history of the Catholic Church that a Pope has been excommunicated, so there is no past precedent of any kind here.  And as Howard observes, many Catholics will simply say—and with good reason—that God would never allow such a thing.  They can cite this very biblical passage in support of their position.

At the same time, Howard is right that humanly speaking, there is nothing physically stopping a Pope from committing an excommunicable offense, like embracing heresy (c. 1364.1) or being directly involved in procuring an abortion (cc. 1398 and 1329.2; see “Is She Excommunicated? Sanctions, Part II” for more on excommunication and abortion).  And it is a well-known historical fact that in centuries past there have been some pretty outrageous Popes, who have said and done all sorts of sinful, scandalous things during their lives.  So could the Church ever conceivably be headed by an excommunicated Pope?  And if so, what would happen, and how would it work?  Let’s walk our way through this complicated issue step by step.

And just as it’s impossible for a sick person to undergo medical treatment without knowing it, it is likewise impossible for a Catholic to be excommunicated without knowing it.  This fact cannot be emphasized enough—in part because the world seems to have more than its share of hyper-scrupulous Catholics who fret that they may somehow have been excommunicated accidentally, without realizing exactly what happened or why.  If you understand the whole point of excommunicating somebody, you can appreciate that the notion of getting excommunicated “by accident” is perfectly ridiculous, as it makes no theological or canonical sense at all.  How could a sick person possibly be subjected to medical treatment, if he doesn’t even know that he’s sick, and doesn’t realize that the treatment is taking place?

Nobody can be excommunicated unless all the conditions of canon 1323 have been met. This canon provides a whole list of situations, any one of which will render a person not liable to a penalty. These conditions were addressed in greater detail in both “Am I Excommunicated? Sanctions, Part I,” and “Is She Excommunicated? Sanctions, Part II,” but briefly, no Catholic is subject to any penalty if he is under the age of 16; was ignorant that his action was a violation of the law; was forced to commit the crime, or committed it under fear; acted in self-defense or in the defense of another; or lacked the use of reason (as is the case with mentally ill, mentally handicapped, and senile persons).

If even one of these conditions applies to a Catholic (including a Pope!) who committed an excommunicable offense, he is not subject to the penalty, and cannot be excommunicated.  Period.

That’s why, as we saw in “Was Theologian Hans Küng Ever Excommunicated?” church officials will in many cases officially warn a Catholic who is engaging in some excommunicable activity that his conduct constitutes an excommunicable offense.  The Church is charitably assuming that the person doesn’t know that what he is doing/saying is punishable by excommunication—and so it wants to explain to him that he is playing with fire, so as to convince him to stop.  If the person persists anyway, he obviously will not be able to claim ignorance of the law later on.

What about ferendae sententiae penalties?  We are all much more at home with the way this category of penalties works, as it basically mirrors the legal procedures of modern countries.  A ferendae sententiae excommunication is not incurred ipso facto, by virtue of the law itself; rather, it is imposed by church authorities, much like a judge in a civil court imposing a sentence on someone convicted of a crime (cf. c. 1314).  In cases involving punishments of this type, there is necessarily a lot of back-and-forth between the accused person and the official who imposes the penalty, so the accused is certainly well aware of what is happening to him, and why.

The take-away from all of this is that it is very difficult to get excommunicated from the Catholic Church.  But so few people actually understand this!

Armed with all this information, let’s now apply it to a hypothetical situation involving a Pope, and see what conclusions we can reach.

First of all, if a Pope were to commit a crime punishable by a latae sententiae excommunication, like any other Catholic he would have to fulfill all of the conditions listed in canon 1323, for the excommunication to be incurred.  So (for example) if this imaginary Pope was being threatened, and committed the offense under duress, then no sanction would be incurred, as per canon 1323 n. 3.  Likewise, if he honestly didn’t know that a certain action technically constituted an excommunicable offense, he would not incur the sanction (c. 1323 n. 2, as already noted above).  Incidentally, don’t assume that every Pope has got the Code of Canon Law committed to memory!  Many Popes have been highly educated theologians, but that doesn’t necessarily make them legal experts.  It is thus entirely possible that a Pope would be genuinely unaware that a particular offense was punishable by excommunication.

But for the sake of argument, let’s say that a Pope commits some crime punishable by latae sententiae excommunication, and he fulfills all the conditions of canon 1323.  He acts freely and with full knowledge, without fear or coercion; he is well aware that he will be excommunicated as a result… and he does it anyway.  Now what?

Well, there would be an immediate procedural roadblock in such a case, because unlike every other Catholic on the planet, a Pope has no hierarchical superior on earth (cf. c. 331).  Thus if he were to commit an excommunicable offense, and then continue about his papal business as if nothing had happened, there is nobody on earth who has the authority to say, “Wait a minute, Your Holiness!  You can’t act as Pope any more, because you’re under excommunication!”  That’s because, as canon 1404 tells us tersely, the First See is judged by no one.  Popes are subject to God alone (a fact which has rightly awed so many of them)—so unless God were to choose to intervene in the situation somehow, the Catholic Church would be stuck.

In general, when someone has been excommunicated latae sententiae, it often happens that church authorities will officially make a public declaration to that effect.  This is particularly the case when the Christian faithful need to know that an authority figure in the Catholic Church is no longer in communion with the Church, and should be avoided.  A good example of this was the Vatican’s 1988 declaration of the excommunication of Archbishop Marcel Lefebvre (addressed in greater detail in “Are They Excommunicated? Sanctions, Part III,” and “Canon Law and the SSPX”).  Archbishop Lefebvre consecrated 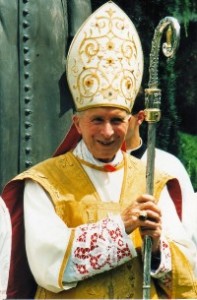 new bishops without the mandate of the Holy Father, in violation of canon 1382, and was well aware that his action was punishable by excommunication latae sententiae—yet he did it anyway.  His excommunication thus occurred ipso facto, without the Vatican doing a thing; but because many Catholic clergy and laypeople were involved in various ways with Lefebvre and his Society of St. Pius X, and because there was a lot of confusion about the legality of what he was doing, the Vatican wisely made a formal pronouncement on the matter, so as to clarify Lefebvre’s status as a Catholic bishop in a public, official way.

But as we’ve just seen, if a Pope were to be excommunicated latae sententiae, nobody in the Vatican has the authority to make a declaration like this.  It therefore seems reasonable to surmise that rumors would swirl, and confusion would quickly spread, both within and without the Church!

Unfortunately, there’s more.  Canon 1331 lays out the practical ramifications of excommunication, noting among other things that an excommunicated Catholic is forbidden to exercise any ecclesiastical offices, ministries, functions or acts of governance (c. 1331.1 n. 3).  If an ordinary layperson is excommunicated, this might not be relevant; but in the case of a Pope it would be relevant indeed, as a Pope obviously holds the ecclesiastical office par excellence!  Imagine a Pope who had been excommunicated latae sententiae, but was blithely ignoring that fact, continuing to select new diocesan bishops, accept episcopal resignations, create new dioceses, remove high-ranking officials from office, canonize saints, etc. etc. etc.  How could a Pope do any of these things within the Church, if he himself had been removed from communion with that Church?  For very technical reasons which are outside the scope of this piece, theologians and canonists generally hold that such acts by a Pope in this situation would be illicit, yet valid; but all the uncertainty and chaos that this would cause in any event is painfully obvious.

Now try to reconcile this hypothetical chaotic situation within the Church, with Our Lord’s words to Peter in Matthew 16, quoted earlier.  It would seem that this kind of ecclesiastical mayhem is the very sort of thing that Christ assures us He will prevent from happening.

This is why some scholars have hypothesized over the centuries that if a Pope were about to commit an act that would excommunicate him, God might perhaps prevent this by striking him dead.  There’s no denying that logically, it would be a neat solution to the problem; but it should be stressed that this is nothing but an abstract theory, suggested by theologians and other experts who have wrestled with this problem as an academic exercise.

The fact is, we don’t know what God would do.  We only know that He has promised that the forces of evil will not prevail over His Church; how He wishes to go about protecting the Church is of course entirely up to Him.  And so we can only leave this theoretical problem in His Hands.  Thus any discussion of such an extreme scenario provides us with a good reminder that ultimately, when push comes to shove, we Catholics should place all our trust not in the Code of Canon Law… but in God Himself.