Q: At a family reunion this summer, we learned that the priest who had married my cousin and her husband has been removed from the parish.  He was accused of pedophilia or some other sexual impropriety… and he admitted it.

When my cousin wasn’t listening, my aunt wondered out loud if the marriage was not celebrated validly?  She said that the priest was living a false life, which would also affect the sacraments he conferred.  I’m sure that this argument is bogus, but I didn’t know how to refute it.  Could you explain this issue so that I’ll be able to discuss it intelligently in the future? –Kelsey

A:  Kelsey is right on track here, even if she doesn’t know the exact rationale behind her position.  The personal sanctity—or lack thereof—of the priest or other cleric who administers the sacraments does not affect their validity.  Period!  Interestingly, this issue doesn’t even come up in the current Code of Canon Law, which was promulgated in 1983; but that’s not an oversight.  On the contrary, this issue was settled so many centuries ago that the Church doesn’t see much reason even to mention it, at least in canonical texts.  The fact is, this question raged (and was resolved) over 1600 years ago, during what is known today as the Donatist Schism.  The statements made by church leaders back then are still cited today as the definitive word on this question!  So let’s take a look.

The Donatist problem didn’t start on its own.  It actually was later fallout from the 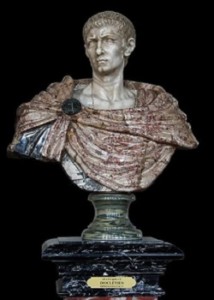 persecution of Christians by Roman Emperor Diocletian (who ruled 284-305), starting in about the year 303.  This was the last, and fiercest, of all the Christian persecutions by Roman Emperors—which finally ended when Emperor Constantine the Great officially legalized Christianity in 313, and became a Christian himself.  During Diocletian’s persecution, untold thousands of Christians throughout the Roman Empire were killed for their faith.  (Well-known martyrs like Saint Agnes and Saint Sebastian are believed to have been executed during this period.)  In addition to arresting Christians, Diocletian ordered Christian churches to be destroyed, and all sacred books to be confiscated and burned.

Since North Africa was part of the Roman Empire, it too experienced this persecution.  Roman officials searched the populace for Christian books, and it went without saying that if you possessed such writings, you had to be a Christian yourself.  If you were found with such books in your home, therefore, you could instantly be arrested—and it was a safe bet that death would be forthcoming.  North-African Christians apparently reacted to these searches in a confusing variety of ways.

While the Church’s long list of saints includes many early martyrs who bravely refused to deny their faith and lost their lives as a result, it’s important to realize that not every Christian back then reacted in the same honorable way.  An unknown number of them denied the faith, claiming either that they had never been Christians, or had toyed with the faith for a while and then left it, and in this weak-kneed way they managed to evade execution.  This was true not just during the persecution initiated under Diocletian, but in other periods of persecution as well.

In North Africa, there were many martyrs who courageously died for their belief in Christ—but there appear to have been plenty of weak-kneed Christians too.  Some of them handed over sacred books to be destroyed, and renounced their faith to save their lives.  Others hid the Christian books that they possessed, and gave the Roman authorities “heretical books” (whatever that meant) to be burned… and after the persecution was over, they praised their own actions as meritorious.  Still others had no sacred books of their own, but to protect themselves they went to the Roman officials and helpfully identified their friends who did.

When Christianity became legal under Constantine, and the Church slowly began to rebuild itself, the North African Christians who had survived through their own cowardice had some explaining to do.  It was all further complicated by the fact that among these cowards there had been some Catholic clergy.  What was the Church in North Africa to do with them?  Should they have simply been allowed to return to their ministry after confessing their actions?  And what about those who made excuses for their behavior, claiming that the ways they had dealt with their persecutors were morally justified?  Many Christians who had not waffled during the persecution, and family members of those who had courageously died as martyrs, were outraged at the idea—and understandably so.  When a new Bishop of Carthage was chosen, and he was consecrated by a bishop who had obsequiously cooperated with the Roman persecutors, there was an uproar.  Led by a different bishop named Donatus, many Christians insisted that the episcopal consecration was invalid, because it had been done by someone who had, during Diocletian’s persecution, failed to stand up for the faith.  The Donatists consecrated somebody else as Bishop of Carthage—so there were two bishops, two theological factions, and lots of politics and fighting.

Are you confused yet?  This is actually a grossly oversimplified account of events at the time!  But the bottom line in theological terms was this: some Christians in North Africa were claiming that a sinful cleric could not validly celebrate the sacraments.

The Emperor Constantine himself got involved in the dispute, but could not reconcile the two sides.  That was done by Pope Melchiades, who put together a commission in Rome to study the arguments, and ended by declaring that the Donatist position was wrong, and the episcopal consecration performed by a bishop who had collaborated with the Roman persecutors was indeed valid.

Even after this official statement by the Pope, the Donatists refused to back down, denying that the Bishop of Carthage was a validly ordained bishop.  (We see here a classic case of schism, which the code defines as the refusal of submission to the Supreme Pontiff, or of communion with the members of the Church subject to him [c. 751].)  Almost a century later, Saint Augustine—who happened to be a bishop in North Africa himself—analyzed the theological positions of both sides, and in response formulated many basic ecclesiological concepts which the Catholic Church still holds today.  Among them is the teaching that Catholic clerics who celebrate the sacraments do not have to be in a state of grace, in order to administer them validly.  Obviously, it’s always preferable in the moral sense to be holy, rather than sinful—but the validity of a sacrament does not hinge on the sanctity of the minister.

Today, the Catechism of the Catholic Church contains a fairly brief reference to this question, which plagued North African Christians for generations:

Since it is ultimately Christ who acts and effects salvation through the ordained minister, the unworthiness of the latter does not prevent Christ from acting.  St. Augustine states this forcefully:

“As for the proud minister, he is to be ranked with the devil.  Christ’s gift is not thereby profaned: what flows through him keeps its purity, and what passes through him remains dear and reaches the fertile earth…. the spiritual power of the sacrament is indeed comparable to light: those to be enlightened receive it in its purity, and if it should pass through defiled beings, it is not itself defiled.”  (CCC 1584).

Medieval Catholic theologians refined the terminology a bit further, asserting that the sacraments are efficacious ex opere operato (literally, “from the work having been worked”), and not ex opere operantis (“from the work of the worker”).  Put simply, the graces of the sacraments come from God Himself when they are celebrated; the cleric celebrating them can be said to function as a sort of conduit.  That’s why the cleric’s holiness or sinfulness has no effect on the validity of the sacraments.

Kelsey’s aunt thinks that “the priest was living a false life, which would also affect the sacraments he conferred.”  But this is a huge leap of illogic.  Yes, it’s true that the minister of the sacrament has to have the right intention when celebrating it; and it’s also entirely possible that a priest could be hiding some serious sin of his own.  But if a priest is in a state of sin, it does not automatically follow that whenever he administers the sacraments, his intention is flawed.  To quote the Catechism again,

From the moment that a sacrament is celebrated in accordance with the intention of the Church, the power of Christ and his Spirit acts in and through it, independently of the personal holiness of the minister” (CCC 1128).

In the case of marriage, regular readers already know that the sacrament is not conferred by the priest anyway.  As we saw in “Marriage and Annulment,” the sacrament of matrimony is actually administered by the spouses to each other; the priest is there to receive their vows in the name of the Church (c. 1108).

It’s entirely possible, of course, that the wedding of Kelsey’s cousin was invalid for some other reason.  To cite one example, one or both of the spouses may have exchanged defective consent (for more on this, see “Canon Law and Fraudulent Marriages,” and “Contraception and Marriage Validity”).  But this would be a problem entirely unrelated to the personal sanctity of the priest who celebrated their wedding.

So while there’s no doubt the situation regarding the priest in question is tragic, there is no reason to worry on that account about the validity of Kelsey’s cousin’s marriage.  We can see that the Church has a theological understanding of the sacraments that in practical terms is very workable: we need never wonder if the priest who administered a sacrament to us was “sinless enough” to do it validly.  The fact is, we’re all sinners, and that’s why it’s a good thing that the sacraments don’t hinge on our personal holiness.  They work through God’s grace, and that’s quite enough to do it right.