Excommunication and Bad-Mouthing the Pope

Q: During this Jubilee Year, “Missionaries of Mercy” have been sent around the world with special powers to lift excommunications. The Vatican Archbishop who made this announcement mentioned the excommunicable crime of physical violence against the Pope, and said that this includes speech which criticizes him. This was a great shock to me… can we Catholics really be excommunicated if we say something negative about the Pope? What happens when a fellow bishop or a personal friend speaks to Pope Francis, and finds fault with something he said or did, is he penalized for daring to object? Criticism can often be a healthy thing. To me it sounds like a police state… –Matteo

A: Matteo is referencing remarks made a couple of months ago by Archbishop Rino Fisichella, President of the Pontifical Council for Promoting the New Evangelization, with regard to the Extraordinary Jubilee of Mercy inaugurated by the Pope last December. As most of us probably know, Pope Francis commissioned a number of priests to be Missionaries of Mercy, giving them the power to lift those excommunications which normally can only be remitted by the Holy See. What is this all about? Let’s take a look first at the excommunications that can be lifted by these Missionaries, and then at Archbishop Fisichella’s bewildering comments.

In the current Code of Canon Law, there are a only a relative handful of crimes which are punishable by excommunication; in many of these cases, when the offender repents and wishes to return to the Church as a Catholic in good standing, the sanction can be lifted by the local bishop (cc. 1355-1356). But there are five excommunicable offenses in the code, for which the sanction can only be lifted by Rome. In these cases, the excommunication is said to be “reserved to the Holy See”:

1) Throwing away, or taking away with the intent to desecrate, the Eucharist (either consecrated bread or wine), canon 1367;

3) Absolution in the confessional of an accomplice in a sin against the sixth commandment, canon 1378.1. This crime of its very nature pertains only to priests, and it works as follows: If a priest were to engage in adultery, the “accomplice” is the other party to the sin. Let’s say that the accomplice later repents of the sin and wants to confess it. The accomplice may certainly receive absolution, but not from the priest involved in the sin. He is not permitted to grant absolution in this case, except in danger of death (c. 977); if he does, the absolution is invalid, and the priest (not the accomplice!) is subject to excommunication;

4) Consecrating a bishop without a pontifical mandate, canon 1382. By definition this crime can only be committed by a bishop, who alone has the power to consecrate a priest as bishop (c. 1012), but who is not permitted to do this unless the Pope has mandated it in a specific case (c. 1013); and

5) Violating the seal of confession, canon 1388.1. Of its very nature this crime can only be committed by a priest; those others who are also bound by the seal may also be excommunicated, but they can also be given a lesser penalty instead (see “Besides the Priest, Who Else is Bound by the Seal of Confession?” for more details on who else is required to keep the seal of confession).

Two other crimes, not included in the Code of Canon Law when it was promulgated in 1983, are now also punishable by excommunication reserved to the Holy See:

6) Attempting to confer the sacrament of Holy Orders on a woman. This change in the law was decreed in 2007 by the Congregation for the Doctrine of the Faith, and pertains to both the person who attempts to ordain a woman, and the woman who attempts to receive ordination. See “Are They Excommunicated? Sanctions, Part IV” for more on this; and

7) Violating the oath of secrecy taken during a papal conclave. This change took force with Benedict XVI’s 2013 changes to conclave law, and pertains only to the clergy who are not Cardinals, and all the housekeeping and other support staff in the Vatican who might conceivably overhear conversations among the Cardinals during the conclave. This was discussed in more detail back in “When Will the Conclave Start? Pope Benedict’s Final Legislative Act.”

Initially, it was announced that the priests commissioned by the Pope as “Missionaries of Mercy” would have the authority to remit all of these excommunications. That meant, in practice, that a person who had committed any of these crimes could approach one of these Missionaries and have the sanction lifted. (Normally, it’s necessary to contact the proper office of the Vatican in order to do this.) But in February, the Vatican issued a clarification to the Missionaries, that their powers extend only to the lifting of sanctions resulting from the violations mentioned above in (1), (2), (3), and (5). Bishops who have violated (4) above are still required to contact the Vatican directly; and (6) and (7) are simply not mentioned.

If at this point readers are questioning whether these excommunications are incurred very often, they’ve definitely got a point! God alone knows for sure how many Catholics alive today are currently under excommunication for the offenses mentioned…but presumably the number is relatively low. In great part that’s because, as has been mentioned many times before in this space, there are a lot of conditions which must all be met before an excommunication is actually incurred. (See “Am I Excommunicated? Sanctions, Part I” and “Is She Excommunicated? Sanctions, Part II” for an in-depth discussion of what all these conditions are.) Consequently, while the Missionaries of Mercy may end up being quite effective in encouraging Catholics in general to go to confession and experience God’s mercy during the Jubilee Year, it seems unlikely that they will actually find themselves remitting large numbers of excommunications reserved to the Holy See.

Now that we’ve seen what an excommunication “reserved to the Holy See” is, and what the Missionaries of Mercy can do, let’s take a look at the baffling statement by Archbishop 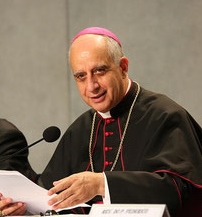 Fisichella, regarding the issue of excommunication incurred by one who uses physical force against the Pope.

At a press conference on December 4, 2015, Fisichella outlined the duties and faculties of the Missionaries of Mercy as discussed above. When the excommunicable crime of using physical violence against the Pope was mentioned, the Archbishop added this ambiguous comment:

I would say that we need to really understand “physical violence,” because sometimes words too are “rocks and stones”—and therefore I believe that some of these sins are also far more widespread than we might think.

It would appear—although the wording is less than clear!—that Archbishop Fisichella was indicating that the excommunication incurred under canon 1370.1 applies not only to a Catholic who uses the actual “physical force” specified by the canon, but also to those who speak ill of Pope Francis. Was Fisichella making an official statement, authoritatively interpreting the canon on behalf of the Pope? If not, then what was he saying, and why? No wonder Matteo is confused!

While it’s obviously impossible for us to read the Archbishop’s mind, several things may safely be concluded about his assertion. First of all, Fisichella is not a canonist, and while he is the head of a Pontifical Council, that particular entity does not have the power to make authoritative interpretations of the canons of the code. Apart from the Pope himself, who is the Supreme Legislator (cf. c. 331), only the Pontifical Council for the Interpretation of Legislative Texts has the authority to do this (cf. Pastor Bonus 154 ff.). Thus Fisichella was not providing the Church with an official interpretation of canon 1370.1, since he has no authority to do so.

In any event, such a broad interpretation of the term “physical force” is inconceivable, for one simple reason: canon 18. This canon states that laws which establish a penalty are subject to strict interpretation. Therefore, since canon 1370.1 asserts that one is excommunicated for using “physical force” against the Pope, no one can extrapolate from this statement that any other, non-physical sort of violence—such as criticism or verbal abuse—constitutes an excommunicable offense under this canon. Period.

It’s actually quite straightforward: if a Catholic were to intentionally hurl a dangerous object at the Pope, shoot/stab him, deliberately smack or kick him, run him over with a car, etc., then canon 1370.1 would apply. Otherwise, it wouldn’t. If only all canon law were this easy!

Now Pope Francis could, in theory, amend the law to make a verbal attack on the Pope a crime punishable by excommunication… but nobody should be waiting with bated breath for that one. Archbishop Fisichella’s comment was not accurate and it understandably confused a lot of people.

Interestingly, this isn’t the first time that Archbishop Fisichella has made a controversial and erroneous public comment about excommunication. In 2009, he was removed from his position as President of the Pontifical Academy for Life after criticizing a diocesan bishop in Brazil for his alleged mishandling of an exceptionally tragic case, in which a 9-year-old girl, pregnant as the result of rape by her stepfather, received an abortion. The Archbishop publicly claimed at the time that the local bishop had been more concerned with publicly excommunicating the doctors who performed the abortion under canon 1398, than with helping the poor girl (an assertion that was quickly proven to be false). But worse, the wording of Fisichella’s statement was ambiguous enough to actually suggest that the abortionists had done a positive thing—causing many to wonder whether or not canon 1398 was even still in force!

Reaction was swift, from church officials in South America, members of the Pontifical Academy for Life, and from Pope Benedict himself—who ordered the Vatican newspaper to publish a “clarification” written by the Congregation for the Doctrine of the Faith, confirming that procuring an abortion remains, as per canon 1398, an excommunicable offense. One might have thought that after this experience, the Archbishop would be more careful about checking his facts before speaking publicly about the penalty of excommunication—but such is apparently not the case.

Matteo is right that the Catholic Church is not and should not be a “police state.” Catholics are expected to acknowledge that the current Pope is the Vicar of Christ on earth, and defer respectfully and obediently to him on matters pertaining to Catholic doctrine (see “When Does the Pope Speak Infallibly?” for more on this). But we certainly are not required by law to like or agree with every single thing the Pope ever says, writes, or does, and there’s no crime committed if we want to honestly disagree with (let’s say) his decision to meet with a particular public figure, or his choice of words on a non-doctrinal matter. As many of us were taught as children, “Sticks and stones may break my bones, but words will never hurt me.” Contrary to Archbishop Fisichella’s assertion, words are not stones, they do not constitute physical force against the Supreme Pontiff, and they most certainly do not lead to excommunication under canon 1370.1.