Will Australian Priests Be Forced to Violate the Seal of Confession?

Posted on April 18, 2013 by canonlawmadeeasy

Q:  I know that priests aren’t allowed to reveal what people tell them in confession.  But what happens in places where reporting sexual abuse of children is mandated by law?  They’re talking about making it a legal requirement now in Australia, just like they did in Ireland.  Will priests really have to go to jail, rather than violating the seal and revealing the identity of a penitent to the police?  –Lauren

A:  Readers from “down under” are no doubt keenly aware that last fall, Australia’s Prime Minister Julia Gillard announced the formation of a federal Royal Commission to investigate child sexual abuse.  One stated purpose of the commission was to examine the role of religious institutions in covering up abuse of children by the clergy.  The Prime Minister, who is a professed atheist, left open the possibility that the commission could decide to mandate reporting of child molesters by priests who learn of it in the confessional.  Gillard described priests’ maintaining the seal of confession in such circumstances as a “sin of omission,” because “adults have got a duty of care towards children.”  Her position was quickly echoed by Australia’s then-Attorney General (likewise an atheist), who declared, “I think the whole community finds that idea [that priests would not report abuse] really abhorrent.”

You don’t need to be a canon lawyer to know that Catholic priests are obliged to keep secret the sins that penitents confess to them in the sacrament of Penance.  As canon 983.1 notes quite simply, the confessional seal is inviolable.  Priests know full well that there are no exceptions, and that if they repeat the contents of a confession they’ve heard, in such a way as to identify the penitent, the penalty is excommunication latae sententiae (c. 1388.1).  (See “Have Pro-Abortion Politicians Excommunicated Themselves?” for a discussion of how latae sententiae penalties work.)  The possibility that a nation might legally require priests to violate the confessional seal was already discussed in the abstract, in “Can a Priest Ever Reveal What is Said in Confession?” but as Lauren’s question shows, in some countries these days this abstract possibility is dangerously close to becoming concrete reality!

Although canon law on this subject couldn’t possibly be any clearer, the clarity of the issue 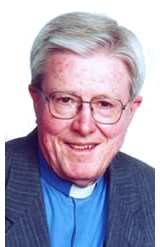 was muddied in Australia by some public statements by Bishop Geoffrey Robinson, retired Auxiliary Bishop of the Archdiocese of Sydney.  (See “Bishops, Coadjutors, and Auxiliaries” for an explanation of what an auxiliary bishop is.)  Bishop Robinson publicly stated that he “would be prepared to break the seal of confessional because you have to weigh up the greatest good, and here the greatest good is surely the protection of innocent people.”  In the same interview, the former Auxiliary declared that George Cardinal Pell, the Archbishop of Sydney, is an “embarrassment” to the Church in Australia.  Cardinal Pell has objected strongly to the possibility that Australia’s laws may be changed to mandate violation of the confessional seal.  The end-result was the appearance of two “sides” on this issue within the Church in Australia.

But the reality, of course, is quite different: in the Catholic Church in Australia there are those who follow church teaching, and some who don’t.  Bishop Robinson already was reprimanded by the Australian Catholic Bishops Conference several years back, for writing a book that questions Catholic teaching on (among other things) papal infallibility and certain moral issues.  Unfortunately, Robinson’s more recent statements on the confessional seal show that his understanding and/or acceptance of at least some elements of basic Catholic theology is still far from orthodox.  The fact is, if Bishop Robinson were to hear the confession of a child molester, and subsequently use that information to identify the person to the authorities for prosecution, he would incur immediate, instantaneous excommunication.  As has been noted in “Am I Excommunicated? Sanctions, Part I,” and “Is She Excommunicated? Sanctions, Part II,” there’s a whole list of conditions that need to be fulfilled before someone can incur this sanction (c. 1323).  Ironically, it’s hard to imagine that Bishop Robinson is unaware that his own situation would meet all of the canonical criteria—because he’s not only a bishop, he’s also a canon lawyer!

Bishop Robinson aside, if the Australian government were to establish a law requiring anybody who finds out about child sexual abuse to report it to the authorities, and didn’t make an exception for clergy who learn of it in the context of a confession, the Catholic Church’s official reaction would be pretty straightforward: priests would not be able to comply, period.  On paper, then, this would put the Church on a collision-course with the civil authorities, and priests could be arrested and maybe even imprisoned.  But in practice, what would actually happen?  Let’s think through the practical implications of such a law.

For starters, it doesn’t appear that Australia’s politicians are aware that confessionals in that nation are probably not filled with child molesters on a regular basis.  (As one irritated priest told me recently, “you would think that pedophiles were running in and out of confession all day!”)  That being said, however, it undoubtedly does happen, praise God, that some sexual abusers reach a point where they are truly sorry for what they’ve done, and want to change their lives.  If a repentant molester is Catholic—and by the way, not all of them are!—then it’s entirely possible that he may show up in the confessional.  As was already discussed in “Can a Priest Ever Reveal What is Said in Confession?” in such a case the confessor can not only encourage the penitent to turn himself in to the authorities, but he can even make the granting of sacramental absolution contingent upon it.  It’s simply foolish to imagine that hordes of Australian child molesters are being absolved of their sins in confession, with no strings attached, and then merely going on their way!

It’s also unreasonable to take it for granted that a confessor could honestly identify an abuser—cleric or not—who had come to confession.  As was discussed at greater length in “Confession by Appointment and Face-to-Face,” the Church formally acknowledges that penitents may naturally wish to be anonymous when confessing their sins, and in ordinary circumstances they have the right to make their confession through a confessional screen, which conceals their identity.  What would Australian authorities reasonably expect an Australian priest to do, if someone admitted to the sexual abuse of children in the confessional, and the priest honestly didn’t know who he was?

No less reasonable would be the assumption that after such mandatory reporting-regulations came into force in Australia, pedophiles would ever come to confession!  If anything, the practical fallout from such a new law would be to guarantee that even if a (Catholic) child abuser was sorry for his past actions, he would avoid the sacrament of Penance for sure, out of fear of being turned in to the authorities.  And this is precisely why the Catholic Church has, for centuries, insisted on confessional secrecy—to ensure that no matter how heinous our sins may be, we can confess them without fear of the consequences. There is no question that this is consistent with what God Himself wants.  As Pope Francis pointed out in his very first Angelus address, God “never tires of forgiving… He is that loving Father Who always pardons, Who has that Heart of mercy for us all.”  Instituting a civil requirement that certain sins be reported to the authorities would only serve to block repentent sinners from seeking God’s forgiveness.

So far, it doesn’t seem that Australia’s pro-reporting politicians have thought this matter through very thoroughly, does it?  But there’s one last issue which doesn’t appear to have occurred to them: enforcement.  In other words, how on earth could Australian civil authorities ensure that Catholic priests were in fact complying with such laws?  Would they expect priests to submit reports on all the confessions they’ve heard recently, and to attest that none of them involved sins of sexual abuse?  Would they want all confessions to be recorded, and then checked by law enforcement?  The sheer absurdity of the potential issues involved here should be obvious.

But before we start chuckling at such nonsense, it’s worth noting that if the government were hostile enough to Catholicism, it could theoretically send “plants” to confession, to admit to fictitious sins of child molestation—and then to document the confessor’s response.  Because the seal of confession is so utterly absolute, a priest-confessor who was later accused of “failing to report a molester” would be completely unable to defend himself in any way.  He could say nothing, because a priest can never violate the seal, even in self-defense!  This would be no laughing matter, because a priest might then be prosecuted for failing to follow Australian civil law—because he was following church law instead.

Perhaps it is the utter unworkability of such reporting-rules that caused this issue to apparently fade away (so far) in Ireland, where regulations similar to those now being proposed in Australia were under discussion in 2012.  Ireland’s Catholic priests immediately declared publicly that they would never comply with mandatory reporting laws that required them to violate the sacramental seal, and this was of course confirmed by Irish bishops.  (Unlike Australia, there has been no high-level, open dissent in Ireland along the lines of retired Bishop Robinson’s public statements.)  Lauren’s apparent assumption that priests in Ireland are required by law to violate the seal of confession in the case of child abuse is mistaken—at least to date, they are not.

We can see how seriously the Church takes the sacrament of Penance, since Catholic clergy will be sent to prison, if necessary, rather than violate the seal of confession!  This willingness of priests to go to such lengths, to enable repentent sinners to return to God without fear of any reprisals, is an echo of Christ’s great love for us, in dying a shameful death on the cross in order to free us from sin.  It ought to make us Catholics all the more grateful for the great gift of the sacrament of Penance—and for the great gift of the priesthood, without which confession of our sins would be impossible!  It’s one more good reason to pray for priests, not only in Australia but also throughout the world.